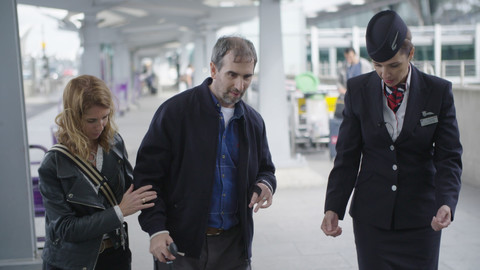 LONDON, 2017-Oct-30 — /Travel PR News/ — British Airways stepped in to help customer, Joe Dowd on a milestone journey from Heathrow to Dublin this month. Though not a long journey, it was a very important one for 47 year-old Brentford based Joe as it was his first flight since he suffered a life-changing brain injury in 2014, which left him with significant physical and cognitive challenges.

His wife, Liz, got in touch with the airline to tell them Joe’s story and to ask for support with his first flight. Liz explained that her husband had previously worked in banking and regularly travelled the world, but his condition had left him unable to fly. After a long period of intense rehabilitation Joe defied medics and learnt to walk again, but one of his big goals had been to fly. Joe worked hard to become strong enough to trial flying again and the couple planned a short flight to Dublin, to visit extended family in Ireland.

After receiving a heartfelt letter, British Airways stepped in to make the journey as memorable as possible for the deserving pair, with a few surprises along the way. A behind-the-scenes video captured the journey.

Surprised by a British Airways ambassador at their home in Brentford, Joe and Liz were whisked off to Heathrow in a Rolls Royce Phantom and surprised with a montage of well-wishes from his family and friends who are supporting them as Joe rebuilds his life. As Joe had explained that when he was young his dream was to be a pilot, he was met by Captain Ben Collins for a tour of the flight deck, before being invited for a day at British Airways flight simulator with his sporting hero, Chris Froome.

Joe and Liz had previously lived in Australia, with Joe’s ultimate goal being to fly back to visit one day. On landing at Dublin the couple were surprised by the airline with a pair of complimentary Club World (business class) tickets to Sydney as an incentive for him to step from one of British Airways nearest destinations to the furthest.

Joe said “It’s been an amazing experience from start to finish. From being met by the British Airways ambassador to meeting Captain Ben and then surprising us with the Australia tickets, it was a day I’ll never forget!”

Liz said “When I wrote to British Airways telling them Joe’s story, I never imagined they would help make the journey so special. It was such an incredible and emotional milestone, Joe’s specialist team feel that he has returned even stronger. The whole experience was truly memorable and magical.”

Carolina Martinoli, British Airways director of brand and customer experience, said: “When Liz wrote to us and told us about Joe’s bravery, we wanted to do everything we could to make sure he had an enjoyable and seamless journey. Our ambassadors, ground staff, cabin crew and pilots worked hard to make sure it was a trip Joe and Liz would never forget. They are a truly inspirational and deserving couple.”

British Airways is asking customers who have booked a trip with them to email their stories in, in the hope of making their trip a little bit more magical.

Customers can visit the BA Magic page (https://www.britishairways.com/en-gb/destinations/where-in-the-world/bamagic) to watch Joe’s video and share their own story.