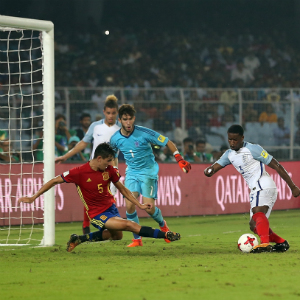 DOHA, Qatar, 2017-Oct-30 — /Travel PR News/ — Qatar Airways has given match tickets to two lucky football fans to join in the celebrations and watch the final of the FIFA U-17 World Cup India 2017 football tournament in Kolkata, India.

The fortunate winners won the tickets as part of a social media contest held by Qatar Airways, the Official Airline of FIFA. They were selected from thousands of spectators who submitted pictures using the #KolkataTogether hashtag to enter the contest.

Qatar Airways Cabin Crew participated in the awards ceremony by presenting medals to players from the England team, after they won first place in the tournament in a sensational performance against Spain. England beat Spain with a 5-2 win in the thrilling final match before a capacity crowd of more than 66,000 people at Kolkata’s Vivekananda Yuba Bharati Krirangan stadium.

Qatar Airways Group Chief Executive, His Excellency Mr. Akbar Al Baker, said: “This final game has capped a magnificent tournament for all of those who took part in the FIFA U-17 World Cup India 2017. We are delighted to be the Official Airline Partner of FIFA and join in the celebrations with thousands of dedicated football fans.

“As a nation, we place great importance on sports as a means of bringing people together. We at Qatar Airways are excited to take part in this tournament to help inspire and nurture the next generation of young football players.”

FIFA Director Marketing Services, Mr. Jean-François Pathy, said: “The support of our Official Partners is vital to the success of all our FIFA events. In that respect, Qatar Airways have done a tremendous job in building excitement around the FIFA U-17 World Cup India 2017 through #KolkataTogether. The use of such innovative digital campaigns creates positive engagement with our fans and contributes to promoting football not only in India but also around the world.”

Qatar was announced in May as an Official Partner and the Official Airline of FIFA as part of a ground-breaking sponsorship package lasting until 2022. Upcoming events sponsored by Qatar Airways will include the 2018 FIFA World Cup™ in Russia, the FIFA Club World Cup, the FIFA Women’s World Cup and the 2022 FIFA World Cup in Qatar.

As an Official Partner of FIFA, Qatar Airways will have extensive marketing and branding rights at the next two FIFA World Cups, with an expected audience reach of billions of people per tournament. The airline will also have visibility at competitions such as the FIFA U-20 World Cup, the FIFA Futsal World Cup and the FIFA Interactive World Cup, the world’s largest online gaming tournament.

Qatar Airways was named the Skytrax ‘Airline of the Year’ earlier this year. The national carrier of the State of Qatar also won a raft of other major awards at the Skytrax awards ceremony, including ‘Best Airline in the Middle East’, ‘World’s Best Business Class’ and ‘World’s Best First Class Airline Lounge.’

Qatar’s national carrier operates a modern fleet of more than 200 aircraft to a network of more than 150 key business and leisure destinations across Europe, the Middle East, Africa, Asia Pacific, North America and South America. The airline is launching a host of exciting new destinations planned for the remainder of this year and 2018, including St Petersburg, Russia; Adana, Turkey and Cardiff, U.K, to name just a few.