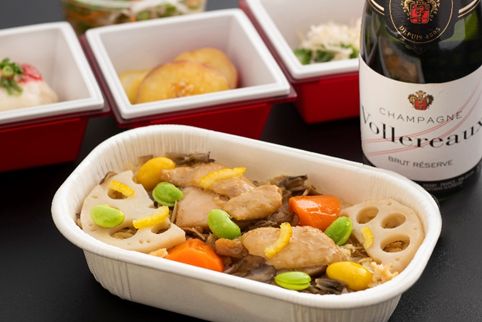 Tokyo, Japan, 2023-Jan-12 — /Travel PR News/ — JAL has been implementing various in-flight meal initiatives(*1) to achieve the SDGs, and as part of these initiatives, were offering in October 2021.

Under the theme of “In-flight Meals for the Future,” JAL will begin offering the new “RED à table” menu in Premium Economy and Economy Class on medium- and long-haul international flights.

The new menu will be supervised by three outstanding chefs in Vietnamese, Italian, and Japanese cuisine who have previously excelled in , “RED U-35,”, Japan’s largest chef competition to discover young talent for the new era.

The menu includes the “Future 50 Foods” (*2), as well as the aroma, texture, and appearance of each ingredient when you open the lid of the main dish. Please enjoy the menu that the three chefs have created with their own unique tastes.

In addition, videos introducing the chefs’ ideas behind each menu item, the secrets behind their deliciousness, and behind-the-scenes development will continue to be available through the inflight entertainment and on the website.URL reference：https://www.youtube.com/watch?v=rY57vJ1gbsg
(*1) URL reference： https://press.jal.co.jp/en/release/202212/007096.html
(*2) Unilever and WWF (World Wide Fund for Nature) advocate sustainable foodstuffs in terms of safety and nutritional value.

You may also be interested in:  The Pacific Asia Travel Association will be supporting partner of the 2nd Pacific Asia Indigenous Tourism Conference (PAITC) in Vancouver, Canada from September 12 -14, 2015

As part of the “In-flight Meals for the Future,” the ” Future 50 Foods,” which was adopted for the a la carte menu of the in-flight meals for first class and business class on international long-haul flights from Japan, has been incorporated into “RED à table” as well. In addition, from this menu, internationally certified paper products that take forest resources into consideration will be introduced(*3) for containers and lids for main dishes and tray mats.

Japanesea Main Dish
“Yuzu-flavored Steamed Rice with Chicken & Lotus Root”
This dish, which uses okowa, a popular dish not only in Japan but also in Vietnam, where the chef has her roots, is a dish that brings out the cultures of
the two countries. The dish is made with a variety of ingredients, including lotus root, which is one of the “Future 50 Foods” and the Vietnamese national flower lotus, edamame, maitake, carrot, and gingko, cut into sizes that allow you to enjoy the different textures of the ingredients. When the lid is opened, the dish is softly fragrant with yuzu (Japanese citrus fruit), adding a vibrant color to the dish.

Western Main Dish
“Beef Stew with Carrot Rice & Omelet”
We have combined two of our most popular menu items to delight and delight everyone from young children to adults the moment they open the package. Edamame is used for texture, bell peppers for color, and coconut oil for accents, adding a gorgeous appearance and depth of flavor. In addition, carrot rice is used so that children can also enjoy eating vegetables. To cleanse the palate, Shibazuke pickles are added to give the dish a sour taste and texture.

You may also be interested in:  Manchester Airport’s Runway Visitor Park unveils new state of the art flight simulator

Side Dish
The ” Chilled Minced-shrimp Ball with Ume Plum Paste ” with shrimp, a representative seafood of Vietnam, and ume plum accent, “Sweet Potato with Lemon” to remind you of Hiroshima, where CHILAN is located and the largest producer of lemons in Japan, and “Okra with Mashed Tofu & Sesame” from “Future 50 Foods,” a healthy dish with a gentle taste using okra and sesame seeds.

Term 1：January 10 – April 30 (tentative)
Hiroshima “CHILAN” Chef DONGUYEN Chilan (Vietnamese cuisine)
Born in Tokyo. In 2020, she and her husband, a sommelier, opened “CHILAN”, a modern vietnamese and natural wine restaurant on the opposite shore of Miyajima in Hatsukaichi City, Hiroshima Prefecture. “CHILAN” is listed in Gault et Millau 2021, the French restaurant guide, and was a finalist in RED U-35 2021, where she received the KISHI Asako Award, given to a female chef who shows great promise for the future. Mother of one child.

Term 2：May 1 – July 31 (tentative)
Kyoto “cenci” by Chef YOKOYAMA Kosuke (Italian cuisine)
Born in Osaka Prefecture. After graduating from university, he honed his skills at “IL GHIOTTONE”, a pioneer in Kyoto vegetable Italian cuisine, before going to Italy. He returned to Japan after studying in four provinces including Rome, and became sous chef when “cenci” opened in 2014. Michelin Guide Kyoto/Osaka 2022 it was listed as one star in the Michelin Guide Kyoto-Osaka 2022 and ranked in Asia’s50 best 2022

Born in Ishikawa Prefecture. After graduating from a college, he entered a culinary school. He honed his skills at Japanese restaurants in Osaka and Kyoto, and served as head chef at “Izakaya Nagahori” (Osaka) and “Nihon no Yado Natoraku (Ishikawa)

In 2020, he opened his own restaurant, “Ipponsugi Kawashima” in his birthplace, Nanao City,Ishikawa Prefecture.

* Menus may change on some routes.

Please refer to the URL for details：https://www.jal.co.jp/en/inter/service/newsky/kitchen_gallery/red.html