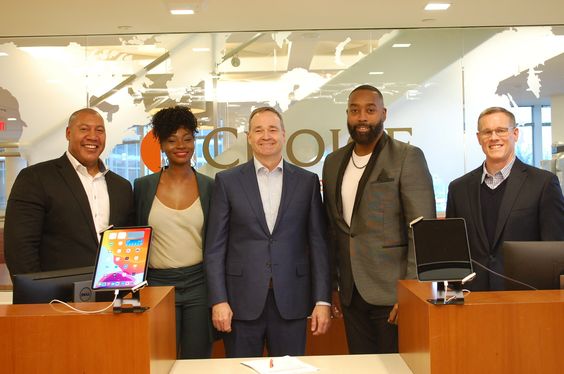 To commemorate the occasion and the Ascend Hotel Collection’s continued growth into travelers’ favorite vacation destinations, Choice Hotels executives and representatives from the hotel’s ownership team, including co-CEO’s Julian Brittano and Karie Brittano, convened for an official signing ceremony at Choice’s headquarters in Rockville, Maryland at the end of last year.

Expected to debut in summer 2024, The Rook at South Boston, a four-story, 37-room boutique property will feature distinct design and modern amenities, including a rooftop bar, full-service restaurant and bar, and event center. Ideally situated at 327 Main Street in the heart of South Boston’s tree-lined historic downtown district, The Rook at South Boston will provide guests with access to the many attractions that reflect this rich tradition, including local restaurants, shops and art galleries. Formerly known as Boyd’s Ferry, Virginia’s South Boston community is best known for its iconic Victorian architecture and small-town charm. The building, originally built in 1929, is also within driving distance to nearby Roanoke and Richmond, Virginia, making it an ideal weekend getaway.

“Advancing opportunities for underrepresented entrepreneurs in the hospitality industry remains a top priority for Choice,” said John Lancaster, vice president, emerging markets, franchise development and owner relationships, Choice Hotels International. “Exactly 20 years ago, Choice became the first hotel company with a team dedicated exclusively to growing a diverse franchisee base and today we are proud to have awarded over 340 franchise agreements to under-represented minorities and seasoned entrepreneurs since the program started. We look forward to working with The Brittano Group, Inc. as we celebrate another milestone for this important initiative with the first Ascend hotel being developed through this one-of-a-kind program.”

You may also be interested in:  Boeing and ELG Carbon Fibre announces partnership that will reduce solid waste by more than one million pounds a year

The Rook Hotels is owned by accomplished actor, hotelier and social activist, Julian Brittano, and his wife, Karie Brittano. Julian is known for beginning his acting career as a co-star to Oprah Winfrey in the Oprah Winfrey Network’s hit series, “Greenleaf.” Karie has more than a decade of business development experience and has held a Class A CIC General Contractor’s License since 2019. The Brittano’s originally acquired the historic hotel from the town of South Boston earlier last year for $11 million before entering into a franchise agreement with Choice Hotels. By owning this hotel, the Brittano’s are among less than 1% of Black hoteliers globally.

“It’s clear that Choice Hotels cares about both creating more opportunities for people of all backgrounds to enter the hospitality industry, as well as supporting franchisees every step of the way so we can maximize our investment,” said Julian Brittano. “We are thrilled to be joining the industry’s largest soft brand in the Ascend Hotel Collection, which allows us the freedom and creativity to bring our unique vision for The Rook Hotels to life while still being backed by a global engine and afforded best-in-class resources to ensure success.”

Karie Brittano added about The Rook Hotels: “It’s one of the largest properties in downtown South Boston and its restoration is expected to spark a revival; to become a pillar for the community’s revitalization. It’s where old-world meets its stunning new world design, paying homage to the South Boston Speedway just six miles away and Virginia’s International Raceway.”

There are over 330 Ascend Hotel Collection properties worldwide, open and in development as of September 30, 2022. In the coming months, additional hotels are scheduled to open in popular destinations including Orlando, Florida; Sutter Creek, California; Lake Charles, Louisiana and Puerto Rico.

You may also be interested in:  Dusit International launches its new ASAI Hotels brand this September with the opening of ASAI Bangkok Chinatown

As a part of the Ascend Hotel Collection by Choice Hotels, guests can participate in the award-winning Choice Privileges loyalty program. Choice Privileges membership is free and offers fast rewards and exclusive member rates for those who book directly at www.choicehotels.com.

The Ascend Hotel Collection global portfolio of independent resort, historic and boutique hotels is part of Choice Hotels, one of the world’s largest leading hotel companies. Recognized as the hotel industry’s first “soft brand” concept, there are over 330 Ascend Hotel Collection properties open and in development worldwide as of September 30, 2022, including in France, the United Kingdom, Denmark, Finland, Ireland, Norway, Spain, Sweden, Turkey, Australia, Canada, Ecuador, and throughout Mexico, the Caribbean and Central America. Membership with the Ascend Hotel Collection enables distinctive, independent properties to gain a global presence while maintaining their local charm. For more information, visit www.choicehotels.com/ascend.

Choice Hotels International, Inc. (NYSE: CHH) is one of the largest lodging franchisors in the world. With nearly 7,500 hotels, representing nearly 630,000 rooms, in 46 countries and territories as of September 30, 2022, the Choice® family of hotel brands provides business and leisure travelers with a range of high-quality lodging options from limited service to full-service hotels in the upper upscale, upper mid-scale, midscale, extended-stay, and economy segments. The award-winning Choice Privileges® loyalty program offers members a faster way to rewards, with personalized benefits starting on day one. For more information, visit www.choicehotels.com.

About The Rook Hotels®

Established 2021, The Rook Hotels®, a subsidiary of The Brittano Group, is described as an urban luxury boutique brand. It is headquartered at 327 Main St., South Boston, VA 24592. Co-CEO’s are Julian and Karie Brittano. For more information, visit www.therookhotels.com.

You may also be interested in:  KLM Group Commits to 30% CO2 Emissions Reduction by 2030 with Approval from Science Based Targets Initiative

This communication includes “forward-looking statements” about future events, including anticipated development and hotel openings.  Such statements are subject to numerous risks and uncertainties, including construction delays, availability and cost of financing, and the other “Risk Factors” described in our Annual Report on Form 10-K and our Quarterly Reports on Form 10-Q, any of which could cause actual results to be materially different from our expectations.