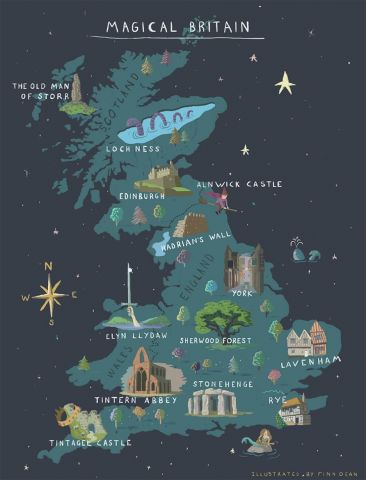 To celebrate the 20th anniversary of the publication of Harry Potter and the Philosopher’s Stone (26 June) VisitBritain is showcasing what makes Britain a magical destination.

London, 2017-Jun-27 — /Travel PR News/ — It has released an interactive online map(link is external) of magical sites across Britain which have inspired some of the world’s greatest literature and legends, from Harry Potter to Sherwood Forest, from King Arthur to Nessie.

“From Glenfinnan Viaduct in Scotland where the Hogwarts Express travelled, to Professor McGonagall’s classroom at Durham Cathedral, to exploring the Forbidden Forest at Warner Bros Studio, Harry Potter’s Britain is the stuff of magic.

“Harry and his wizarding world continue to hold generations of readers from across the globe spellbound, firing up imaginations and inspiring people to explore locations and landscapes and experience the wonder themselves.”

Drawn by the UK’s culture and heritage, overseas travellers who visit castles or historic houses spend about £8 billion annually. Film and literature are also powerful motivators for travel, with more than a third of potential visitors to the UK wanting to see places featured on screen.

Literature and films boost tourism across regional destinations. Snowdonia provided the backdrop for King Arthur: Legend of the Sword, while Highclere Castle in Hampshire is home to Downton Abbey, and the BFG film featured the Angel of the North and Isle of Skye.

Latest statistics for 2017 show that there were a record 11.8 million overseas visits to the UK from January to April, up 11% on the same period in 2016. Overseas visitors spent £6.2 billion, up 14% and also setting a new record.

Latest flight booking data from ForwardKeys shows that bookings for international arrivals to the UK during the summer are currently tracking 12% ahead of the same period last year.

Tourism is worth £127 billion annually to the UK economy, creating jobs and boosting economic growth across its nations and regions.