Dublin, Ireland, 2013-11-22 — /travelprnews.com/ — Four Seasons Hotel Dublin is launching a Toy Appeal to support Temple Street Children’s Hospital over the festivities to help bring some happiness to little ones who are ill this Christmas.

Four Seasons will have Christmas Teddy Bear Teas at the Hotel on December 7, 14 and 21, 2013 from 3:00 to 5:00 pm with visits from Hamleys Bear and is inviting donations of new teddies for children ill in the Hospital. In return, children under 6 years will receive a complimentary Teddy Tea featuring cakes, sandwiches and hot chocolate.  Hamleys Bear and Four Seasons Hotel Dublin will then deliver the teddies to the children in Hospital before Christmas.

All teddies will be displayed in the Ginger Bread House at Four Seasons Hotel Dublin ahead of being delivered on Monday, December 23. 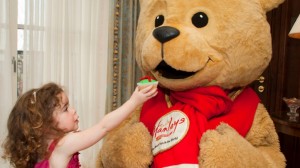