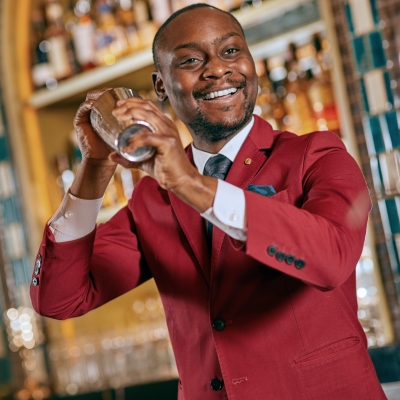 Jakarta, Indonesia, 2019-Jul-23 — /Travel PR News/ — Nautilus Bar at Four Seasons Hotel Jakarta welcomes the newly appointed Head Bartender from Charles H. Keith Motsi. Born in Harare, Zimbabwe and raised in the United Kingdom, Keith has travelled around the world as a bartender gaining a wealth of international experience working in many different locations around the world.

“My profession is also a lifestyle that I’ve grown to love,” says Keith Motsi. “And blurring the lines between work and fun is what keeps life interesting. Running a bar gives me a window into being part of that human experience.”

Charles H. is a hidden speak easy located at Four Seasons Hotel Seoul. The sultry bar’s namesake, Charles H. Baker, was known as the cocktail icon of the Gilded Age, touted as the lovechild of Indiana Jones and Jay Gatsby, according to St. John Frizell from Condé Nast Traveler. Baker was the man behind many of the creations cocktail connoisseurs drink and love today, and as a world-travelling culinarian, Charles H. Baker pioneered the transnational fusion of flavours in the cocktail world.

“We are so excited to welcome Keith Motsi for the first time in Jakarta and bring the experience of Charles H., the #14 Asia’s Best Bar 2019, to Nautilus Bar and our guests,” says Salim Elkhayati,  Director of Food & Beverage.

With a nod to the Prohibition-era speakeasies of New York, Charles H. plays host to cocktail connoisseurs and spirited gatherings into the early morning hours. Rich design elements inspired by traditional Korean metalwork motifs take the popular concept to a new level, while a carefully-edited selection of bottles produces classic and contemporary libations. It’s a thoroughly modern experience inspired by the travels and writings of global cocktail authority and legendary bon vivant Charles H. Baker.