LONDON, 2014-6-13 — /Travel PR News/ — easyJet, the UK’s largest and Europe’s leading airline has today announced the addition of a third Airbus A320 aircraft which will be based at Nice Cote D’Azur airport to further strengthen easyJet’s long term commitment to the region.

The aircraft addition will result in the creation of 37 new direct jobs to total over 100 staff employed at the base and is a significant development in the airline’s expansion in France and at Nice Cote D’Azur airport. Over 600,000 passengers fly easyJet to the airport each year from the UK alone, with over three million easyJet passengers in and out the airport each year. The arrival of easyJet’s third aircraft has enabled the airline to become the number one carrier at the airport and expand the number of destinations served from 24 to 28, with four new routes to Hamburg, Marrakech, Lisbon and Palermo.

easyJet marked the occasion with a ‘bike race’ in the Bag Drop area of the airport.  Passengers and passers-by were invited to climb up on a static bike and pedal their way across a virtual easyJet destination map. The fastest cyclists to reach all of the destinations from Nice in the easyJet network were entered into a prize draw with the lucky winner rewarded with flights to any easyJet destination from Nice Cote D’Azur.

Francois Bacchetta, easyJet’s Chief Executive for France said:
“We are delighted to be the number one airline carrier in Nice. It’s testament to us meeting our aims to make travel around Europe easy and affordable with attractive prices whether flying for business or leisure. Now we’ve passed this symbolic 3 million passengers milestone, easyJet is a key player in the region, aiming for sustainable growth and development and we’re thrilled to be celebrating the achievement here at the airport today.”

You may also be interested in:  Belfast City Airport welcomes easyJet's inaugural flight to Bristol

For more information please contact the easyJet Press Office on 01582 525252 or press.office@easyJet.com

You may also be interested in:  Belfast City airport welcomes easyJet's new service to Glasgow 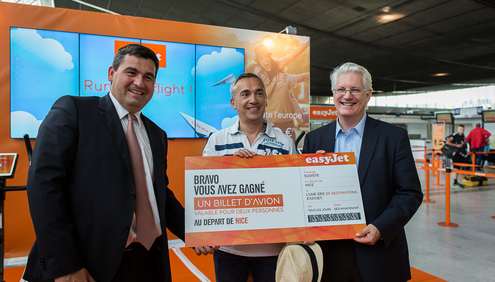