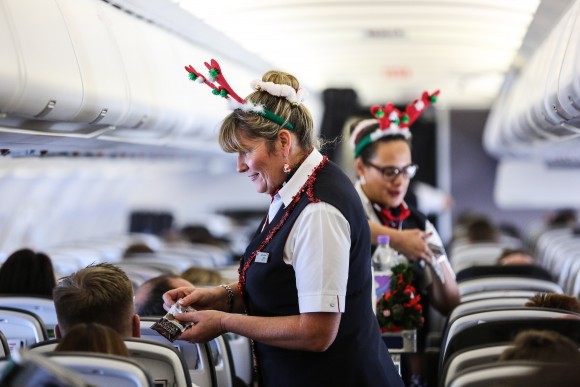 British Airways gears up for a busy Christmas; expects to operate more than 11,000 flights to and from London between December 22-January 4

LONDON, UK, 2017-Dec-08 — /Travel PR News/ — British Airways is gearing up for the Christmas getaway and expects to operate more than 11,000 flights to and from London between Friday December 22 and Friday January 4, with the most popular destinations chosen by customers including New York, Rome and Geneva.

More than 60,000 Christmas dinners and 90,000 mince pies will bring some of the season’s spirit to customers on long-haul flights, and on short-haul flights a new M&S On-Board menu continues the celebration with Santa Percy Pigs and a seasonal Turkey Feast sandwich.

For the first time ever British Airways has created a dedicated Christmas channel on its in-flight entertainment system called ‘Festive Cheer’ showing a number of classic Christmas films including Home Alone and Elf. Television programmes include The Office Christmas Special and audio treats such as Charles Dickens’ A Christmas Carol and Rachel Joyce’s I’ll Be Home for Christmas are gifted to customers.

To help bring some sparkle to the season, the airline has also added two English sparkling wines to its first class drinks menu. Camel Valley and Gusbourne will be available on board for six months.

Carolina Martinoli, British Airways’ director of brand and customer experience, said: “Christmas is obviously an incredibly popular time of the year for friends and families to travel and reunite, so we want to make the flying part of their travels exciting and special for them. To mark the season, we like to inject some fun and tradition with Christmas dinners, festive films and seasonal tipples.”