International traffic increased by 3.7 % in May compared to May last year, while domestic traffic experienced a growth of 1.5 %.

OSLO, 2014-6-13 — /Travel PR News/ — In sum, 4.4 million passengers travelled to and from Avinor’s airports during the month of May.  So far this year, the total number of passengers equals almost 20 million, which represents an increase of 3.9 % compared to the same period last year.

May traffic developments are characterized by the commencement of holiday traffic, with a healthy growth on international and a small growth on domestic. We have a larger and better route offering than last summer, hence we expect a great increase on international routes, says Knut Stabæk, Head of Traffic Development at Oslo Airport.

Among other airports, Alta Airport grew its traffic by 13.3 % in May compared to last year.

The main reason for our growth is an increase in seats due to both SAS and Norwegian increasing their number of routes, explains Charles Kristiansen, Airport Manager at Alta Airport.

The number of aircraft movements increased by 13.3 % compared to May 2013. 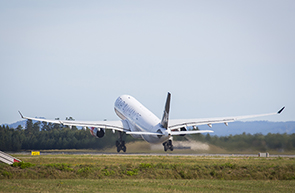 Avinor reports almost 20 million passenegers travelled to and from its airports in May; 3.9 % increase compared to the same period last
year