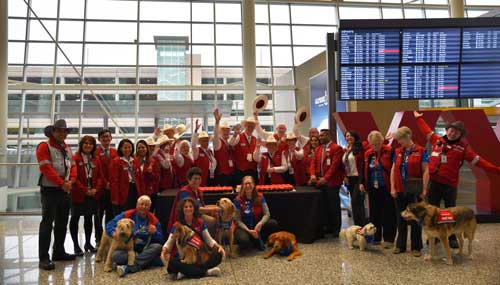 Calgary, Alberta, 2017-Nov-01 — /Travel PR News/ — On October 31, 2017, The Calgary Airport Authority celebrates a year since the opening of its new International Terminal at YYC Calgary International Airport. Since opening to the world, this terminal alone has welcomed an estimated 4.8 million International and U.S. passengers, who brought along nearly 3.7 million bags spread across more than 21,000 flights.

“As we celebrate this milestone, we are thrilled that YYC continues to be a catalyst for our partners to grow their business from Calgary,” said Bob Sartor, President and CEO for The Calgary Airport Authority. “Our vision for providing a positive passenger experience while working to reduce our environmental footprint in a LEED Gold certified facility, in addition to growing our airline network, has made this investment into YYC an important part of our first-anniversary success.”

The International Terminal, the largest single infrastructure project in YYC’s history, added 24 aircraft gates in addition to innovations and technologies designed to improve and streamline the overall passenger experience. One of those innovations, the YYC LINK passenger shuttles, are a first of their kind in Canada. The electric-powered, Canadian-built customized indoor vehicles assist nearly 3,500 people move through the connections corridor each day.

With a total of 15.7 million passengers last year, YYC is one of Canada’s busiest and best connected airports for air service, serving 80 non-stop destinations globally along with Alberta’s only non-stop passenger service to the United Kingdom, Japan, China, Switzerland, Germany, Belize and most recently Mexico City.

ABOUT THE CALGARY AIRPORT AUTHORITY
The Calgary Airport Authority is a not-for-profit, non-share capital organization, incorporated under the Alberta Regional Airports Authorities Act, and is responsible for the safe, secure and efficient management of the YYC Calgary International Airport (YYC) and Springbank Airport (YBW) under long-term lease from the Government of Canada. YYC’s mandate is to advance economic and community development by providing improved airline and transportation services for the benefit of the public. The Authority has invested over $4 billion into the continued development of YYC, opening Canada’s longest runway in 2014 and a new International Terminal in 2016. YYC is a key economic driver for Calgary and Alberta, generating more than $8 billion in economic activity annually and creating 48,000 jobs.