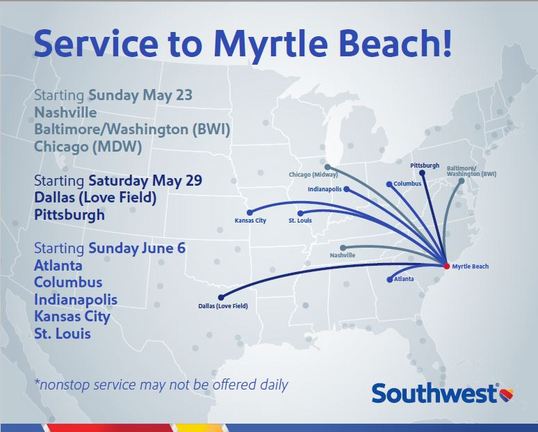 Southwest brings more options for travel including a record-number of nonstop cities for Austin Customers, and additional flights in both established and newly launched Southwest airports

“We continue to tailor our schedule with added flights to address closer-in demand for leisure destinations while making foundational additions to our map that position our network for the future,” Andrew Watterson, Southwest Airlines Executive Vice President & Chief Commercial Officer said. “For Myrtle Beach, we know the arrival of our two bags fly free*—with a golf bag able to count as one of those—will encourage visitors to fly Southwest instead of drive, and consider a quicker trip with us and our value propositions of bags fly free*, golf bags fly free*, low fares, and flexible policies. We’re so pleased to share our Heart with them in time to bring visitors this summer.”

Beginning Sunday, May 23, 2021, Southwest will add service to a third airport in South Carolina, giving Southwest Customers across the country access to Myrtle Beach through five nonstop cities offered within the first week of service: Baltimore/Washington (BWI), Chicago (Midway), and Nashville; and additional nonstop service from Dallas (Love Field) and Pittsburgh will operate on Saturdays beginning May 29. A third wave of service to this stretch of the South Carolina coast will bring options to fly with Southwest nonstop from Atlanta, Columbus, and Indianapolis beginning June 6, 2021. Customers should check Southwest.com for specific itineraries on their desired day of travel, as some nonstop service does not operate every day of the week. Myrtle Beach is accessible on Southwest Airlines this summer from 50+ cities through same-plane and connecting itineraries.

In celebration of the arrival of Southwest Airlines in Myrtle Beach, bringing everyday low fares, flexibility, and ‘golf bags fly free®’* to make it easier for Customers to travel with their favorite gear, Southwest is offering one-way fares to Myrtle Beach from some of the new nonstop cities as low as $69 one-way (purchase by 11:59 p.m. Central Daylight Time April 1). Visit Southwest.com for a complete list of fares, as well as rules, and terms and conditions (also detailed below). The number of seats, days of the week, and markets for these fares are limited.

This summer, Southwest will offer its Austin Customers nonstop service to a record 37 cities including Sacramento (beginning May 9), and Burbank, Miami, Minneapolis/St. Paul, Orange County, and Salt Lake City (beginning June 6), with one-way fares as low as $99 (purchase by March 26, 2021, 11:59 p.m. Central Daylight Time, see detailed fare rules for dates of travel below).

“During the last decade, Southwest has served the most nonstop destinations from Austin each year based on DOT published schedules. In March 2021, more than 70% of our Austin Customers got where they’re going with a nonstop journey on Southwest Airlines. With our new service scheduled to begin in June 2021, our number of destinations available nonstop from Austin is more than double the offering of any other carrier,” Watterson added. “While other carriers have fallen in and out of love with Austin across the years, we’re continuing to build on nearly 45 years of offering affordable and relevant air service for Central Texans and those who are headed there.”

Southwest also will offer nonstop service on weekends between Austin and one of the carrier’s newest destinations, Destin/Fort Walton Beach, Fla., beginning June 6.

Bozeman, Mont., joins the Southwest network on May 27 with previously announced daily service. Beginning June 6 and through the summer, Southwest will offer additional nonstop service on weekends between Bozeman and Dallas (Love Field), Chicago (Midway), and Phoenix.

The carrier now has published daily service between Denver and both Steamboat Springs and Montrose (Telluride) beginning June 6 and running through the carrier’s published flight schedule into mid-August. Those nonstop routes, along with weekend service between Dallas (Love Field) and both airports in the heart of the Rockies continue to support travel demand for the winter and early spring season.

OUR SOUTHWEST HEART CONTINUES TO GROW

In 2020, Southwest added new service to Hilo, Hawaii; Cozumel, Mexico; Miami; Palm Springs, Calif.; Steamboat Springs; and Montrose (Telluride), Colo., continuing five decades of connecting Customers to the places and people they love. In 2021, Southwest began service to Chicago (O’Hare) and Sarasota/Bradenton, both on Feb. 14; and Savannah/Hilton Head and Colorado Springs, both on March 11. Southwest will begin service to both Houston (Bush) and Santa Barbara, Calif., on April 12; Fresno, Calif., on April 25; Destin/Fort Walton Beach on May 6; Myrtle Beach, S.C., on May 23; Bozeman, Mont., on May 27; and Jackson, Miss., on June 6. The Company also has announced its intention to serve Eugene, Ore., and Bellingham, Wash., later this year.

Purchase Myrtle Beach, S.C. today, March 25, 2021, through April 1, 2021, 11:59 p.m. Central Daylight Time. Purchase Austin travel today, March 25, 2021, through March 26, 2021, 11:59 p.m. Central Daylight Time. Continental U.S. travel is valid May 23, 2021, through August 16, 2021. Atlanta, Burbank, Columbus, Indianapolis, Miami, Minneapolis, Salt Lake City, and Orange County, travel begins June 6, 2021. Austin to/from Sacramento is valid May 9, 2021, through August 16, 2021. Except as otherwise specified, continental U.S. travel is valid Tuesdays and Wednesdays only. Travel to Myrtle Beach, S.C. is valid only on Sundays through Wednesdays. Travel from Myrtle Beach, S.C. is valid only on Tuesdays through Fridays. Columbus, Indianapolis, and Pittsburgh travel does not operate on Tuesdays and Wednesdays. Fares valid on nonstop service where indicated; if not indicated, fares are valid on single connecting service. Displayed prices include all U.S. and international government taxes and fees. Rapid Rewards® points bookings do not include taxes, fees, and other government/airport charges of at least $5.60 per one-way flight. Fares not available to/from continental U.S. to/from Hawaii. Seats and days are limited. Fares may vary by destination, flight, and day of the week and won’t be available on some flights that operate during very busy travel times and holiday periods. Travel is available for one-way Wanna Get Away® fares. Fares may be combined with other Southwest Airlines combinable fares. If combining with other fares, the most restrictive fare rules apply. Sale fares may be available on other days of the week, but that’s not guaranteed. Fares are nonrefundable but may be applied toward future travel on Southwest Airlines, as long as reservations are canceled at least 10 minutes prior to the scheduled departure. Failure to cancel prior to departure will result in forfeiture of remaining funds on the reservation. Any change in itinerary may result in an increase in fare. Standby travel may require an upgrade to the Anytime fare depending on Rapid Rewards tier status. Fares are subject to change until ticketed. Offer applies only to published, scheduled service.

In its 50th year of service, Dallas-based Southwest Airlines Co. continues to differentiate itself from other air carriers with exemplary Customer Service delivered by more than 56,000 Employees to a Customer base that topped 130 million Passengers in 2019. Southwest has a robust network of point-to-point service with a strong presence across top leisure and business markets. In peak travel seasons during 2019, Southwest operated more than 4,000 weekday departures among a network of 101 destinations in the United States and 10 additional countries. In 2020, the carrier added service to Hilo, Hawaii; Cozumel, Mexico; Miami; Palm Springs, Calif.; Steamboat Springs; and Montrose (Telluride), Colo. Thus far in 2021, Southwest has initiated service to Chicago (O’Hare) and Sarasota/Bradenton both on Feb. 14; as well as Savannah/Hilton Head and Colorado Springs both on March 11; and will begin service to Houston (Bush) and Santa Barbara, Calif. both on April 12; Fresno, Calif. on April 25; Destin/Fort Walton Beach on May 6; Myrtle Beach S.C. on May 23; Bozeman, Mont. on May 27; and Jackson, Miss. on June 6. The Company also has announced an intention to initiate new service to Eugene, Ore. and Bellingham, Wash., later this year.