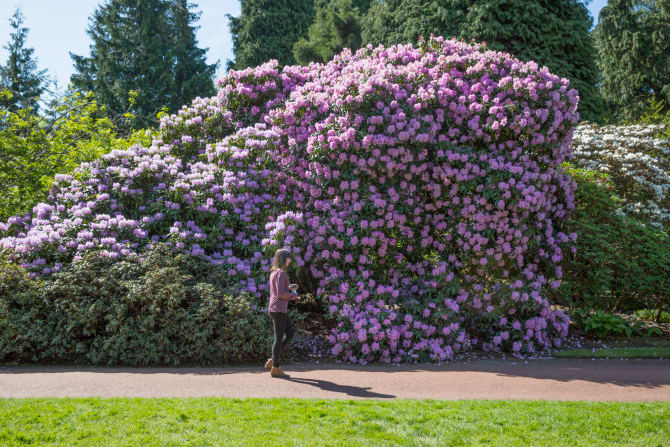 Organised by Discover Scottish Gardens and supported for the first time this year by VisitScotland, the Scottish Rhododendron Festival begins this weekend and will run until 31 May. It will incorporate a number of existing festivals and events as well as highlight other public spaces where visitors can enjoy the spectacular blooms.

Coming hot on the heels of the increasingly popular Scottish Snowdrop Festival, the Scottish Rhododendron Festival will include public gardens, castle grounds and estates from Dumfries & Galloway up to the Highlands.

The Royal Botanic Garden Edinburgh, Dunvegan Castle on the Isle of Skye and the National Trust for Scotland’s Branklyn Garden in Perthshire are some of the top visitor attractions taking part.

A host of gardens in the west of Scotland that make up the Glorious Gardens of Argyll & Bute, including Benmore Botanic Garden, Glenarn, Arduaine and Ardkinglas Gardens, are also participating.

The festival was launched by the Glorious Gardens of Argyll & Bute in 2015. After a successful first year, Discover Scottish Gardens extended the festival across the country and, in 2017, nearly 60 Scottish sites, including public and private gardens, are taking part. They will be offering horticultural events, guided tours and exclusive openings in celebration of this exotic Asian spring shrub that thrives so well in Scotland.

From the ancient Greek for “rose” and “tree”, there are more than 1,000 species of rhododendron, which are famous for their vibrant colours. More than half of the participants are opening their gardens to raise money for national charity organisation Scotland’s Gardens.

Malcolm Roughead, Chief Executive of VisitScotland, said: “Given the enormous popularity of the Scottish Snowdrop Festival over the last decade, it is only natural that our magnificent public gardens should celebrate the rhododendron. We hope people of all ages will be inspired to get out and about to enjoy these colourful, vibrant flowers around some of Scotland’s most stunning gardens and estates.

“Many of the Scottish Rhododendron Festival locations are within the grounds of some of Scotland’s most historic buildings. Such buildings are a perfect fit for Scotland’s Year of History, Heritage and Archaeology. From World Heritage sites to ancient monuments, cultural traditions to our myths, stories and legends, the year-long programme will shine the spotlight on our greatest assets and icons, as well as our hidden gems.”

Kenneth Cox, gardener, plant hunter and rhododendron specialist at Glendoick Gardens in Perth, said: “This year’s rhododendron season is off to a great start with many gardens full of rhododendron colour already.

“Some might say the rhododendron is Scotland’s second national flower. Although they don’t originate in Scotland, rhododendrons are very much at home here. In fact Scotland is one of the places where woodland gardening with rhododendrons was invented. Hundreds of spectacular species thrive here and create stunning displays.

“Some of the most stunning displays can be found in the North at Inverewe and Attadale Gardens, Central Scotland boasts Glendoick Gardens and Branklyn, while the south has Dawyck, Glenwhan, Castle Kennedy and Logan. That said, spectacular collections can be seen the length and breadth of the country.”

Many of the rhododendron sites across Scotland are members of Discover Scottish Gardens, which launched in 2015 with help from the VisitScotland Growth Fund. The organisation aims to put Scottish gardens, nurseries and garden related businesses on the tourism map and to showcase the nation’s outstanding horticulture and plant diversity. For more information, visit www.discoverscottishgardens.org.

To see the full list of participating gardens in the Scottish Rhododendron Festival, go to www.visitscotland.com/bloom