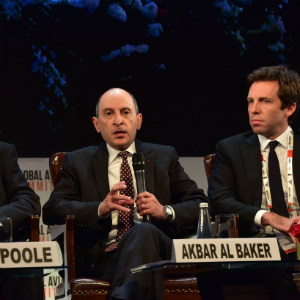 H.E. Mr. Al Baker addressed key leaders of the aviation industry, including senior airline and airport executives as well as government officials and senior dignitaries in a panel discussion titled: ‘Airports of the Future and Building Great Aviation Business’. Alongside H.E. Mr. Al Baker on the panel were key industry influencers, including Director General of International Air Transport Association, Mr. Alexandre de Juniac and speakers from around the world of aviation.

The panel session focused on the need for development and modernisation of aviation infrastructure in India, as well as identifying financial opportunities by governments globally and introducing new policy innovation that can increase the financial sustainability of low-traffic airports. The panel discussed these challenges, as well as how to build great aviation businesses that meet customer expectations while still delivering return on investment.

Qatar Airways Group Chief Executive, His Excellency Mr. Akbar Al Baker, said: “I am very pleased to be in India once again to be able to participate in this important panel discussion. India has become the fourth largest civil aviation market after the United States, China and Japan, and is a crucial market for Qatar Airways.

“With the Indian government planning to invest in developing more than 20 major airports and several smaller airports over the next five years, it’s a very exciting time for the aviation industry in India, and we look forward to discussing these topics this week in Mumbai.”

The Global Aviation Summit was organised by the Airports Authority of India (AAI) and Ministry of Civil Aviation (MoCA) in collaboration with FICCI to discuss the future of the aviation industry, to identify growth areas and to better understand how technology-driven innovation will change air travel globally.

Qatar Airways introduced its revolutionary Qsuite Business Class experience on the Mumbai and Bengaluru routes in July 2018, both of which are served by a Boeing B777 aircraft. In February 2018, the award-winning airline introduced its state-of-the-art Airbus A350-900 on its Delhi route. Qatar Airways was the global launch customer for this aircraft, which features a two-class configuration of 283 seats in total, offering 36 in Business Class and 247 in Economy Class.

The airline recently launched direct services to Gothenburg, Sweden; Mombasa, Kenya; and Da Nang, Vietnam. It has a host of new destination launches planned for 2019, including Valletta, Malta and Isfahan, Iran.

Qatar Airways, the national carrier of the State of Qatar, is celebrating more than 20 years of Going Places Together with travellers across its more than 160 business and leisure destinations on board a modern fleet of more than 200 aircraft. The world’s fastest-growing airline added a number of exciting destinations to its growing network including Gothenburg, Sweden; Da Nang, Vietnam; and Mombasa, Kenya in 2018, and several new destinations are due to be launched in 2019, including Isfahan, Iran and Valletta, Malta.