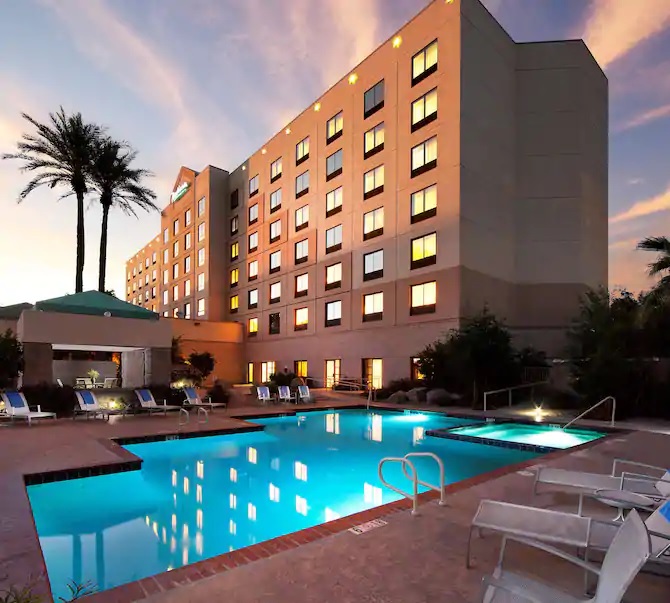 PHOENIX, AZ, 2020-Feb-06 — /Travel PR News/ — Home to the Arizona Diamondbacks and the Arizona Cardinals, the ‘Soul of the Southwest’ is one of the most frequented destinations in the United States. Also known as Phoenix, Arizona’s capital is the city with the fifth largest population in the country and the largest in the state of Arizona.

The city’s booming business sector in downtown Phoenix, responsible for a large part of the influx of visitors coming into the city, is home to the offices of several Fortune 500 and Fortune 1000 companies, including American Airlines, American Express, Wells Fargo, Boeing, Intel and Banner Health – to name a few.  Every year, approximately 10 million people visit Phoenix from Canada and the United States for both business and leisure travel.

When seeking accommodation in Phoenix, many prefer to stay in hotels near the airport. That way you can enjoy the sights of downtown Phoenix and visit its business sector, while at the same time enjoy the landscape of the greater Phoenix area near one of the city’s main transportation hubs, Phoenix Sky Harbor International Airport (PHX). Nearby airport hotels, like the Radisson Hotel Phoenix Airport and the Country Inn & Suites by Radisson, Phoenix Airport, AZ are minutes away from downtown Phoenix, Scottdale, and Tempe, where Arizona State University is located.

From its eclectic city sights to its beautiful mountain trails and one-of-a-kind neighborhoods, Phoenix is becoming an increasingly popular destination. Although many believe that Arizona is simply one large rugged desert landscape with scenic red rock mountains, the city of Phoenix is so much more than its nature preserves and its desert.

Arizona is said to have over 250 days of sunshine. The area’s mild winters and long, sunny days make it the perfect spot for outdoor activities, including hiking, horseback riding, trailing, biking and climbing. There are plenty of natural sights you can visit without having to drive too far out of Phoenix. Some of its most beloved and most frequented include the Desert Botanical Garden –a 140-acre garden, Butterfly Wonderland – the largest butterfly conservatory in the United States, and the Odysea – the largest aquarium in the west of the country.

The McDowell Sonoran Conservancy is a popular family-friend adventure site where you can enjoy exciting adventures, like a 52-hour sunrise to sunset experience that takes you on a journey through the McDowell Sonoran Preserve. Other Sonoran Desert activities you can enjoy include a unique and never-before-experienced Desert Segway activity and a scenic hot air balloon ride, where you get to effortlessly float above the beautiful landscape and enjoy a breathtaking sunset.

For those in Phoenix for a hike but don’t wish to travel too far out, sights like Papago park offer easy treks with little elevation for in-city hiking. Camelback Mountain is also a popular hiking spot for both locals and out of towners as it is in the middle of Scottsdale. It offers two hiking trails, one easier one and the other for more experienced hikers. At the top of the hiking trail, you can relax and enjoy a beautiful panoramic view of Phoenix.

Though the Greater Phoenix city area is quite extensive, the center and anchor of the city is what many refer to as the Phoenix Metropolitan area, the Valley of the Sun, the Salt River Valley or simply Metro Phoenix. This modern yet eclectic metropolitan area made of the Maricopa and Pinal counties with nearly 4.5 million people.

Phoenix offers a wide variety of activities and exciting events all year round, especially in its downtown area. Downtown is the heart of Phoenix with its live music, sports arenas, and many museums and restaurants. If you wish to get acquainted with downtown and learn a little about the history of Phoenix, Pedicabs are the best and most ‘true to Phoenix’ mode of transportation.

The best way to see and experience Phoenix like a local is by heading to some of their favorite hangout spots, which are some of the quirkiest and most unique. The Churchill, a one-of-a-kind Phoenix sight, is a sustainable hangout spot re-purposed from shipping containers where you can find unique local eateries. For some delicious food and entertainment, immerse yourself in the hipster art scene and enjoy the work of local street artists on Roosevelt Row, then head over to the Phoenix public market café, or the Breadfruit and Rum bar. You can also visit Cityscape, a two-block area with restaurants, a club, a comedy theater, and other similar venues.

Other attractions highly frequented by locals include the Talking Stick Arena, Chase Field Stadium and the University of Phoenix Stadium in Glendale. Attending a game at these stadiums is said to be an unforgettable experience because of their retractable roofs. At these popular hangout spots among locals, you can catch a game, enjoy world-class live music entertainment events and visit its restaurants and casino.

For a walkable area filled with shops, art galleries, museums and restaurants, Downtown Scottsdale is where many locals say, ‘the old west meets the new west’. Here, you can find a wide variety of restaurants, from traditional southwestern to more international options. There’s a little bit of everything and you can choose depending on what you are in the mood for.

Due to its production of copper, cattle, climate, citrus, and cotton, the Phoenix Metropolitan area has historically been the economic hub of the state of Arizona. However, in the aftermath of World War II, when manufacturing industries began to make their way into the area, Metro Phoenix became one of the largest urban areas in the nation. To this day, manufacturing is one of the largest industries in the area which continues to spur greater economic growth and further expansions. Following manufacturing, there are also other strong industries such as tourism, technology, and service that are key players in Phoenix’s explosive economic growth over several decades. Currently, the technology and service industries in Phoenix currently account for approximately 77% of total employment in the region.