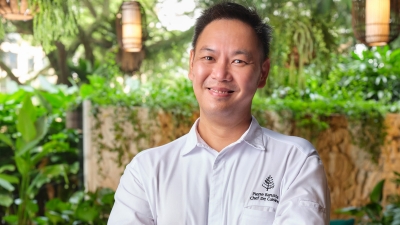 Passionate about fresh seasonal produce and modern French techniques while remaining rooted in his Vietnamese heritage, Chef Pierre was born and raised in France where his passion for all things culinary has taken him around the world in true a la Français over the last 20 years, including stints in a wide variety of top restaurants and hotels in France, Anguilla and Dubai.

Chef Pierre’s foray into culinary arts began in 2001 at a local French boucherie Traiteur Joubert. He then moved to Paris, where he further developed his technique and the finer points his craft, taking up the opportunity of chef de partie at the famously acclaimed Restaurant Michel Rostang, where he worked his way to the pinnacle.

Driven by his hunger to discover the world and hone his skills, Chef Pierre uprooted himself and moved to the West Indies, helming the Michel Rostang at Malliouhana Hotel and Spa in Anguilla, where he pleased the palettes of the most demanding international guests and food critics. Subsequently, he became chef ambassador of Michel Rostang at the Atlantis, The Palm in Dubai and later, as chef de cuisine at Zest Restaurant, One and Only the Palm in 2013.

Deeply connected to the international culinary tapestry, Chef Pierre brings with his arrival to the Lion City a dynamic yet authentic rhythm to the menu of modern Asian brasserie One-Ninety, as well as new dining space, Garden@One-Ninety, an alfresco, sassy extension of the understated One-Ninety Bar.

“Respect for the produce and the people behind them define my philosophy. Balance, seasonal freshness, proper cooking technique and of course, passion and a big-hearted welcome are essential elements to creating a memorable dining experience,” shares Chef Pierre.

Since his arrival to sunny Singapore, the trilingual football fan Chef Pierre can be found busy discovering the culinary scene here. From street hawker favourites to fine dining, he is constantly intrigued and inspired by the variety of cuisines, stories and people behind the dishes and experiences.