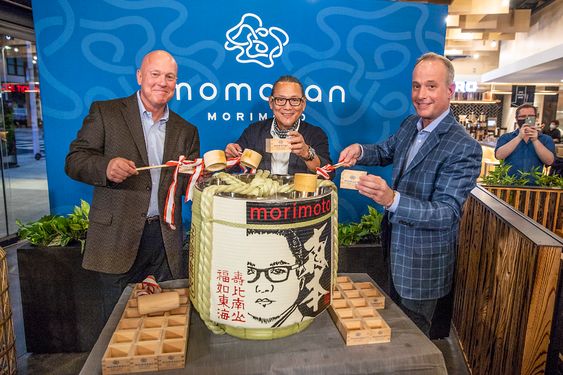 Boston, Massachusetts, 2021-Oct-19 — /Travel PR News/ — Delaware North, Patina Restaurant Group and Iron Chef Masaharu Morimoto — a Japanese master chef known for his innovative and signature culinary style — celebrated the grand opening of his highly-anticipated Momosan concept inside of Hub Hall at the Hub on Causeway to the pounding rhythm of Japanese taiko drums. Attendees toasted to the restaurant’s good fortune with a traditional sake barrel breaking ceremony and were treated to a culinary display by Chef Morimoto as he broke down a giant tuna, carving it up to create a seemingly endless maki roll.

“I’m so grateful for the opportunity to open my very first restaurant in Boston in partnership with Patina Restaurant Group and Delaware North,” said Chef Morimoto. “This location was designed to reflect a casually energetic atmosphere with a menu full of fan favorites combined with new flavors that offer guests both familiar dishes like ramen and also items they might not have thought to try before like our roast duck, which is one of my favorites.”

Located adjacent to TD Garden and North Station, Momosan is situated in the heart of Boston’s bustling transportation and entertainment district. Anchoring the new food hall as the only table service restaurant, Momosan joins 17 other existing vendors.

Visitors can stop by for a quick meal and drink at the bar before catching their train, grab a bite on the go from the walk-up sushi counter, or come for dinner before or after catching a Celtics or Bruins game. Momosan Boston will be open for dinner service Thursday-Monday, 4:00 pm to 10:00 pm. Lunch, as well as sushi grab-and-go service, are coming soon. Momosan Boston is currently only accepting walk-in guests. Reservations will be made available later this year via OpenTable.com.

Chef Masaharu Morimoto — known to millions as the star of Iron Chef and Iron Chef America — has garnered critical and popular acclaim for his seamless integration of Western and Japanese ingredients. In 2001, Chef Morimoto opened his first restaurant in Philadelphia, which was later followed by restaurants in New York, Napa, Honolulu, Boca Raton, Mumbai, Mexico City, Tokyo, and Maui. Morimoto Asia Orlando at Disney Springs opened in 2015, followed by Momosan Ramen and Sake NYC and Morimoto Las Vegas at MGM Grand in 2016. Morimoto Asia Waikiki, Momosan Waikiki, and Morimoto Doha opened in 2018, with Momosan Seattle opened in 2019, Momosan Wynwood opened in 2020, and Morimoto Taghazout Bay opened in 2021. In September 2021, Chef Morimoto opened Sa’Moto, a new pan-asian fine-dining restaurant concept, within West Hollywood’s famed Doheny Room, in partnership with Sam Nazarian, SBE, and Disruptive Restaurant Group. Chef Morimoto currently has 18 restaurants around the world. His first cookbook, Morimoto: The New Art of Japanese Cooking (2007), won two IACP awards (in the “Chef’s and Restaurants” category and the “First Book: The Julia Child Award”) and it was nominated for a James Beard Foundation Award. His second cookbook, Mastering The Art of Japanese Cooking (2017), introduces readers to the healthy, flavorful, surprisingly simple dishes favored by Japanese home cooks. Follow Chef Morimoto via Instagram, Facebook, Twitter or www.ironchefmorimoto.com.

Patina Restaurant Group is a bicoastal collection of 40+ restaurants in the premium segment of the hospitality industry. The esteemed group is known for its unique and impeccable market-driven menus, modern design and de?cor, exemplary service culture, and outstanding beverage programs across all locations—offering numerous distinctive, one-of-a-kind dining destinations.

On the East Coast, fan-favorite concepts include restaurants such as Morimoto Asia, Maria & Enzo’s, Pizza Ponte, Enzo’s Hideaway, and The Edison at Disney Springs® in Orlando along with the Italy Pavilion in EPCOT ® World Showcase at Walt Disney World Resort® which encompasses Via Napoli Ristorante e Pizzeria, Tutto Italia Ristorante, Tutto Gusto Wine Cellar, and La Gelateria Toscana. Farther north, it operates iconic venues in New York City such as Lincoln Ristorante at Lincoln Center, Stella 34 Trattoria & Bar at Macy’s Herald Square, STATE Grill and Bar in the Empire State Building, and Banners Kitchen & Tap as well as Hub Hall next to TD Garden in Boston.

On the West Coast, its portfolio is comprised of Downtown Disney® District staples such as Naples Ristorante e Bar, Napolini, Tortilla Jo’s, Catal Restaurant, and Uva Bar & Cafe. Additional venues throughout Los Angeles, many of which are surrounded by celebrated cultural institutions, include Nick & Stef’s Steakhouse, The Kitchen at Descanso Gardens, Leatherby’s Cafe? Rouge at Segerstrom Center for the Arts, Ray’s & Stark Bar at the Los Angeles County Museum of Art (LACMA), Tangata Restaurant at the Bowers Museum and a world- class catering division servicing high-profile events across the country. Learn more at www.patinagroup.com.