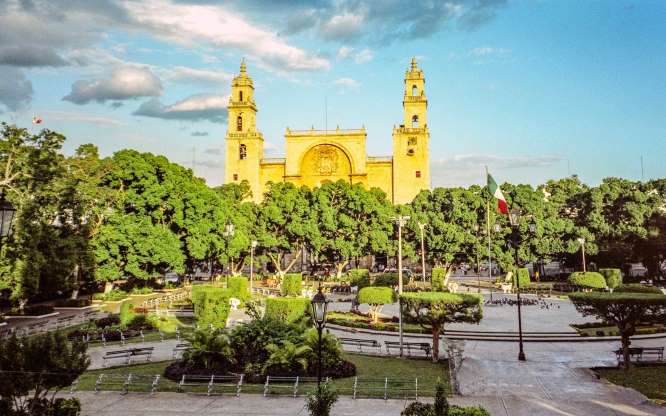 Merida, the Capital of the State of Yucatan, is Named One of the Best Cities In Mexico at Travel + Leisure 2019 World’s Best Awards

New York, 2019-Jul-11 — /Travel PR News/ — The historic city of Merida, capital of Yucatan, has once again been named one of the top cities in Mexico by the readers of Travel + Leisure Magazine as announced this morning by the publication.

Merida is the entry point to the State of Yucatan and a key part of its Six Tourist Regions which include the Yucatan Riviera, Costa Flamingo, Center, Pucc and the Maya World. The city offers a unique visit to Mexico as it exemplifies the region’s rich with culture and history, here, visitors will find a fusion of the Maya with French, German and the fusion of the Spanish-Moorish culture. Merida’s Historic Center shows off this richness in its many colonial buildings, museums, galleries, theaters, outdoor cafes, bars, traditional clothing, parks, hotels, restaurants with national and international food standards.

The city is a great starting point to visit Mexico’s next “it” travel.  The state of Yucatán is the heart of the Yucatán Peninsula. There are more than 19 archaeological sites open to the public. There are cenotes, haciendas, cultural cities, virgin beaches and nature. The perfect cross-section of everything Mexico has to offer, from beautiful beaches and ancient ruins to cutting-edge gastronomy, architecture, art, cultural cities and more.

“We are excited to see that Merida has been included in Travel + Leisure’s prestigious World’s Best Awards as one of the Best Cities in Mexico,” said Michelle Fridman, Tourism Secretary for Yucatán State. “T+L’s readers are well-traveled and with Mexico being the number one international destination for Americans, we are sure they have made their selections carefully. We congratulate all the destinations that have ranked and invite T+L readers to travel to the other regions of our state.”

The U.S. edition of T+L, which launched in 1971, is the only monthly consumer travel magazine in print in the U.S.; has an authoritative website, TravelandLeisure.com; and has an extensive social media following of more than 13 million. Travel + Leisure also encompasses newsletters and media collaborations. Every year, the magazine asks readers to identify their favorite travel destinations and hotels across the world. Readers are asked to share their opinions on top hotels, resorts, cities, islands, cruise ships, spas and airlines that they have experienced. The hotels recognized in the World’s Best Awards are rated on their facilities, location, service, food and overall value.

The city of Merida has been included in the World’s Best Awards for the 4th year in a row, coming in at number 4 in Mexico in 2018, in 2017 it placed 7th in the Best Cities in Mexico and Central and South America and 5th in 2016 under the same category.