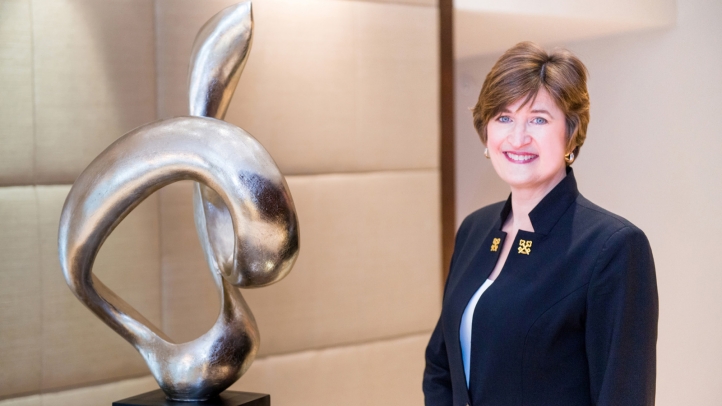 Washington, DC, 2016-Oct-03 — /Travel PR News/ — Julie Saunders has been appointed as Chef Concierge at Four Seasons Hotel Washington, DC, the only Forbes Five-Star and AAA Five-Diamond hotel in the nation’s capital. Saunders, who is only the Hotel’s third Chef Concierge since its opening in 1979, is also the first woman to hold the title. Saunders began her career in the hospitality industry after completing her time as an International Rotary Scholar at the University of Nice.

She joined Four Seasons Hotel Washington, DC in 1993 and has been on the team ever since. During her time at the Georgetown hotel, Saunders has accomplished a wealth of achievements within her field. She is a distinguished member of both the Washington Area Concierge Association and Les Clefs d’Or. Notable recognition from these organisations include appointments as a Member of the Board for both groups, and as Chairman for Les Clefs d’Ors Foundation for the past three years. In addition, Saunders was named a Legend of the Washington Area Concierge Association in 2014 and was named the Where Magazine Silver Plume Concierge of the Year in 1998 and 2016.

“I am honoured to receive Where Magazine Silver Plume Award for Concierge of the Year for 2016,” says Julie Saunders, Chef Concierge of Four Seasons Hotel Washington, DC. “I am humbled that my peers have recognised me for my service to our guests and to my professional concierge community.”

Despite her wealth of achievements, Saunders still actively educates herself on the ever changing role that a concierge serves. “We’re training – always training. That’s what keeps us at our best,” she says. “The thing that defines us is tremendous curiosity. We all love a challenge and figuring out how to solve it. It’s the thrill of the chase.” She is particularly excited about the challenges and opportunities that her new role as Chef Concierge will present.

“I am delighted to lead such a passionate, solid team of professional concierges who daily bring their excellence, creativity and skill to crafting memorable guest experiences,” says Saunders. “There is great joy and satisfaction at the end of the day when you know that all of the ‘behind the scenes’ effort, hard work and team work has our guests smiling and wanting to return.  Concierge work isn’t brain surgery, but it definitely requires knowledge, skill, patience, persistence, finesse and a sense of urgency.  What matters to our guests, matters to our concierge team.”

When not on call for guest requests, Saunders likes to spend time discovering what’s new and interesting in the city she calls home with her husband of 31 years, Gene Saunders. Deeply spiritual, she has also practiced meditation for 25 years and is a fully trained massage therapist – a talent she was inspired to after arranging appointments for years and beginning to receive massage herself. “My spiritual life guides me to things,” she says. Just like her curiosity.

Over the years, Saunders has had the opportunity to spread her talent, spirituality and knowledge around, including on task force for Four Seasons openings, most recently in Orlando. However, Four Seasons Hotel Washington, DC is proud to be the home of new Chef Concierge Julie Saunders.