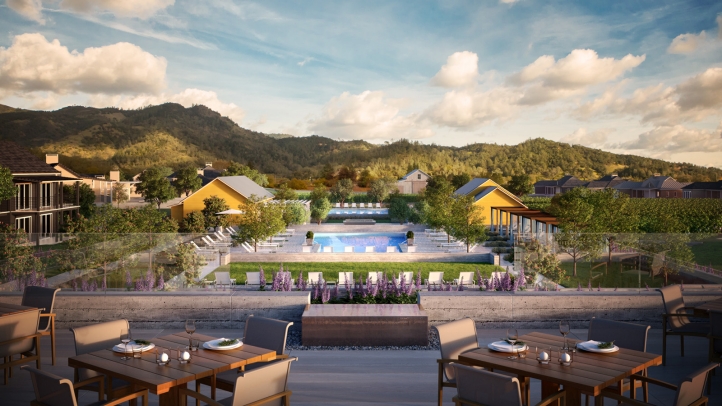 “Calistoga is the best place in the country to be cooking and a special place for me personally, abundant with friends who I admire cooking and farming nearby,” says Anderson. “While living in San Francisco, I spent my weekends in Calistoga unearthing inspiration and appreciating its soulfulness. I look forward to crafting a beautiful, delicious dining experience at TRUSS Restaurant and Bar that is uniquely Northern Californian.”

“Chef Anderson brings proven expertise and an insightful connection to Calistoga that will honour wine country’s exceptional food and wine status while bringing an original experience to TRUSS Restaurant and Bar at Four Seasons Resort and Residences Napa Valley,” says General Manager Mehdi Eftekari. “With a working winery onsite, Chef has a unique opportunity to distinctively and playfully pair his cuisine with estate vintages as well as intriguing bottles from our neighbours.”

Anderson began his culinary career in 2006 at the world renowned three Michelin-starred restaurant The French Laundry in Yountville, Calif. Anderson then moved to Minneapolis for a position at Auriga where he honed his skills under the tutelage of Chef Doug Flicker. After three years working with Flicker, Anderson accepted a position on the opening team Hotel Ivy’s Porter & Frye. In 2009, Anderson brought his creativity to Tim McKee’s Sea Change Restaurant & Bar, where his cooking garnered nationwide attention and marked a turning point in his career, being named a James Beard Foundation Award nominee and Food & Wine’s “People’s Best New Chef Midwest” finalist.

After staging at the prestigious Noma restaurant in Copenhagen, Anderson relocated to Nashville to helm the kitchen at The Catbird Seat, now considered one of the country’s most ground-breaking restaurants, where he delivered an ever-evolving, 14-course tasting menu in an interactive format and received another James Beard Foundation Award nomination for “Best New Restaurant.” In 2018, Anderson was brought out to the California Coast where he took over as Executive Chef at San Francisco’s COI, earning two Michelin stars.

Anderson joins TRUSS Restaurant and Bar this summer, where he will create a dynamic and distinctively California-inspired menu showcasing the region’s finest produce and products. The restaurant’s progressive design renders a variety of experiences, from elevated dining in the main dining room to the laid-back, lively atmosphere of the Calistoga Living Room, to a coffee and bottle bar, fireside lounge, and vibrant bar. Representing Napa Valley’s first and only resort set within a working winery, guests will be treated to an incomparable hospitality experience centred on exceptional food and wine, wellness-inspired amenities, authentic service, and a distinct, approachable luxury environment akin to its backdrop in the charming town of Calistoga. Menus and additional concept details for TRUSS Restaurant and Bar will be announced in the coming months.

TRUSS Restaurant and Bar is located at Four Seasons Resort and Residences Napa Valley at 400 Silverado Trail, tucked into the base of Mount Saint Helena at the top of Napa Valley and surrounded by hundreds of acres of vineyards. With only 85 spacious guest rooms, one-bedroom suites, and The Estate Villa, the resort promises to be an intimate retreat that invites guests to explore the lush nature and natural beauty that surrounds it. Within the property, couples and families will have access to the tranquil Gran Roca Spa inspired by Calistoga’s 150+ years of healing; two outdoor swimming pools each nestled amid the vineyard with scenic views; the renowned, fully supervised Kids for All Seasons program; as well as several unique dining experiences.