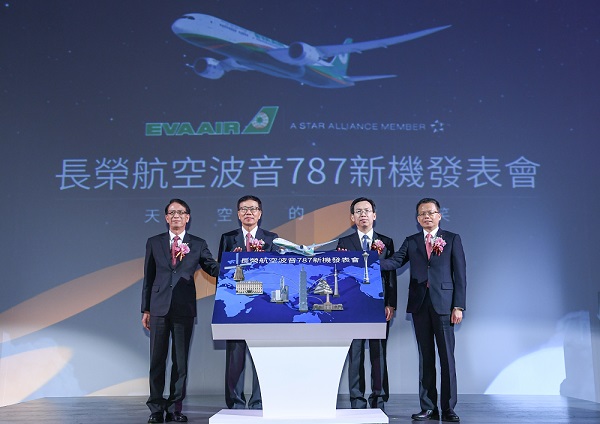 “We plan to introduce four 787-9s and twenty 787-10s. We will take delivery of our second 787-9 this year and begin introducing the 787-10s in the second quarter of next year. We expect to have all 24 Dreamliners in service by 2022,” Chairman Lin said. “EVA is using the Dreamliners to refresh our fleet. For us, the addition of the technologically advanced Dreamliners demonstrates EVA’s capacity to sustain steady growth and continue to upgrade our service quality.”

The Boeing 787-9 Dreamliner has a maximum full-load range of 7,100 nautical miles and can fly nonstop from Taiwan to Vancouver, Seattle, Vienna and Brisbane. The plane is configured for 304 passengers in two cabins, including 26 seats in Royal Laurel Class business and 278 in Economy.

EVA chose Designworks, a BMW Group company, to synchronize the airline’s international brand image and the Dreamliner’s unique craftsmanship into the design of this latest generation of Royal Laurel Class seats. The design team stepped away from conventional aircraft design and used core concepts of space and brand to create tailor-made business class seats seamlessly integrated into a bespoke cabin environment. The team used mature, muted colors to enhance the feeling of a comfortable, spacious environment.

EVA introduced its Dreamliner with a spectacular sound and light show similar to the staging used for the 2017 Summer Universiade in Taipei. Using advanced 3D projection technology, EVA created a 360-degree cinema inside a giant tent where the four walls and ceiling became projection screens for a sophisticated animated film and served as the backdrop for an interpretive dance performance, highlighting the upgraded inflight experience onboard the 787 Dreamliner, the airline’s five-star services and its brand.

As the 360-degree cinema lifted from the floor, EVA revealed its new, flight-ready Boeing 787-9 Dreamliner for an enthusiastic audience. Brandishing the silver 787 logo alongside the flowing orange and green waves of the EVA livery, the plane showed itself to be a magnificent addition to the carrier’s fleet and a proud representative of the Evergreen Group family.

In addition to the dazzling performance and show that accompanied the aircraft launch, EVA premiered its new Dreamliner commercial film. Taking the smile-like curve of the aircraft’s wings in flight as its theme, the film uses the smiling shapes of movement, cultural images, architecture and natural landscapes to tell EVA’s Dreamliner story. The theme symbolizes not only the aircraft’s design but also passengers’ heartfelt smiles as they sit back, relax and enjoy comfortable flight experiences on EVA’s new 787 Dreamliner.

EVA chose light, air and water to focus attention on the advantages that Boeing 787 Dreamliner passengers enjoy. Light emphasizes windows that are the largest available on any aircraft and even allow passengers in the middle seat to enjoy the views. Air accentuates the optimized cabin pressure that serves to reduce jet lag and fatigue and is made possible by the composite construction of the fuselage. Water underscores humidity inside the cabin that is three-to-four times higher than it is on other aircraft, providing better hydration and making passengers more comfortable.

EVA created a photo gallery at the debut event to display photos and videos, telling the Boeing 787 Dreamliner story. EVA used one side of the wall to trace its first 787-9 from assembly through delivery and its arrival in Taiwan. The airline used the other side of the wall for an archival presentation, showing the vital connection between Taiwan’s aviation industry and Boeing 787 Dreamliner supply chain.

In 2005, Evergreen Aviation Technologies Corp. (EGAT) and The Boeing Company contracted to jointly modify four Boeing 747-400s and transform them into Large Cargo Freighters (LCF), capable of transporting the Dreamliners’ large composite parts such as fuselages and wings from manufacturing centers around the world to Boeing factories in the US for assembly. Between 2006 and 2010, one LCF after another became operational. The LCFs have established EGAT as a global aircraft maintenance, repair and overhaul leader.

In 2014, EGAT and GE Aviation formed GE Evergreen Engine Services as a joint venture. The Engine Services operation is the only GE-certified company in the Asia-Pacific region. It specializes in maintenance services on the GEnx engines that power both the Boeing 787 Dreamliner and Boeing 747-8. As more Boeing 787 Dreamliners come into service, this joint-venture will play an increasingly important role in Taiwan’s aviation industry.

EVA expects to put its first Dreamliner in service in November, after it has finalized preparations and certifications. Initially, it will deploy the Dreamliner on the busy Taipei – Hong Kong route. In December, after its second Dreamliner is delivered, EVA will extend the plane’s services to Osaka and Tokyo. The remaining two Boeing 787-9s are scheduled for delivery in 2019 and EVA will use them on flights to Australia and Europe.

EVA Air is a Star Alliance member and among only 11 SKYTRAX-rated 5-Star airlines worldwide. Readers voted it one of Travel + Leisure’s World’s Best “Top 10 International Airlines” and TripAdvisor awarded it top spots in five categories in its annual Travelers’ Choice Awards for Airlines. The carrier was established in 1989 as Taiwan’s first privately owned international airline. It is part of the respected Evergreen Group and a sister company to global container-shipping leader Evergreen Line. It flies a fleet of more than 70 Boeing and Airbus aircraft to over 60 international destinations throughout Asia, Oceania, Europe and North America where gateways are Chicago, Houston, Los Angeles, New York, San Francisco, Seattle, Toronto and Vancouver. Travelers can learn more about EVA and the new Dreamliners and schedule, book and buy tickets at www.evaair.com.