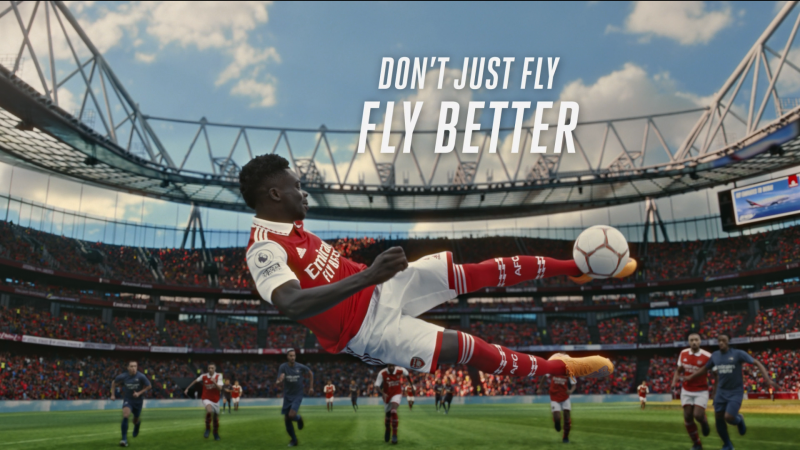 Dubai, UAE, 2022-Nov-23 — /Travel PR News/ — Emirates is gunning for the attention of football fans around the world, with a hat-trick of adverts in the latest instalment of its “Lovers of Sport” campaign.

Featuring Arsenal stars – goalkeeper Aaron Ramsdale, defender Ben White, and winger Bukayo Saka – who have all been called up to the England squad for football’s biggest tournament this month, these new Emirates ad spots see the players fly through the air to make a save or score a goal, and end with the message: “Don’t just fly, fly better”.

These spots highlight the airline’s long-standing support of the beautiful game, and was filmed at the Emirates Stadium, Arsenal FC’s home ground in the UK.

Running this month until mid-December, Emirates’ latest “Lovers of World Football” ads will run across media platforms. TV viewers in Africa, MENA, UK, Germany, France, Mexico can look out for the ads between football games, and also globally on broadcasters like CNN, BBC and Sky News. Fans in these markets as well as Senegal and northern Africa will see the campaign across online video platforms and on other digital media such as social media channels, digital sports publishers, online news publications and football podcasts

The “Lovers of World Football” ads are part of a wider campaign. It follows on the success of Emirates’ “Lovers of Cricket” ad spots which ran recently during the ICC Men’s T20 World Cup and featured cricket superstar Rohit Sharma, who bowled over fans together with English stars Phil Salt and Richard Gleeson.

Emirates is one of the most prominent brands in world football. The airline’s highly visible “fly better” brand message can be seen at major European leagues through its partnerships with top flight clubs like Real Madrid, Arsenal FC, AC Milan, Olympique Lyonnais, and SL Benfica. The Emirates and Arsenal partnership is one of the longest-running in the English Premier League, with the club’s home ground named Emirates Stadium since 2004, and players taking to the pitch in their Emirates-sponsored shirts since 2006.

The historic FA Cup is also sponsored by Emirates as is the Asian Football Confederation.

In addition to football, Emirates also has a strong presence in other top global sports such as tennis, golf, rugby and horse racing. -ends