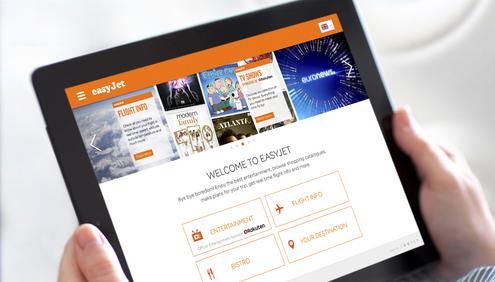 LONDON, 2017-Sep-29 — /Travel PR News/ — easyJet has today announced that it will trial inflight entertainment for the first time in a partnership with Rakuten, a global leader in internet services and e-commerce, and Immfly, an inflight digital services platform provider.

While airlines have traditionally offered seat-back screens, ‘Air Time’ will enable easyJet customers to tune in to a wide range of short-haul suited entertainment including TV and film, kids entertainment, games and audio books as well as easyJet flight information and destination guides, on their own devices.  Moreover, content will cover multiple languages including English, German, French, Spanish and Italian and feature services such as onboard language tutorials and digital pacifiers.

The easy-to-use portal will be accessible through the user’s own device browser which will connect to the onboard wireless network, while in flight mode. To ensure young viewers are protected, any age restricted content will be clearly marked and users will be asked to confirm their age in order to view the content, in the same way as many mainstream online streaming services.

‘Air Time’ will be initially available on five easyJet aircraft from this autumn, with plans to roll the service out to the entire fleet.

“’Air Time’ will allow us for the first time to offer customers inflight entertainment in a way that rep licates how they consume their media at home.”

‘We are delighted to be collaborating with more innovative partners, such as Rakuten who will help us curate engaging content, and Immfly who are providing the unique easyJet inflight platform with a dedicated customer support team, ensuring that easyJet crew are able to continue conducting an excellent standard of safety-focused service and onboard hospitality.”

“Rakuten is very excited about the opportunity to partner with easyJet and to support the creation of a winning inflight entertainment proposition. We are confident Rakuten can bring strong value and create a high quality showcase of its services through the onboard Immfly platform offering a best in class user experience.”

Just some of the entertainment available on ‘Air Time’ will include critically acclaimed TV titles such as superhero series Legion and quirky comedy Modern Family as well as a range of family favourites and box office hits.

The airline is leading in using the latest technology to streamline the processes customers go through.

It is currently exploring applications which will improve and enhance the digital self-service proposition through the customer journey with a particular focus on voice. Airport Explorer is an app in development which responds to voice commands to help passengers easily locate airport amenities. In June the airline become the first European airline to launch an Amazon Alexa skill which enables passengers to easily and quickly check their flight status and which has already racked up over 30,000 searches.

“We look to the latest technology to enhance our customer’s travel experiences at every stage of their interaction with us from searching and browsing for a flight through to stepping off the aircraft in their destination. The announcements today show real progress and leadership in this area.“

easyJet has been leading in recent advances in digital in order to enhance and simplify passengers’ experiences when flying. One million people scanned their passport details last year with their mobile camera phone making check in significantly faster and easier. 25% of all easyJet passengers now choose to have their boarding passes on their phone through the easyJet app which can be used at 125 airports across easyJet’s network.

Following an announcement last year easyJet and Founders Factory are actively working together to support and drive existing travel tech start-ups and co-create two new travel businesses within the incubator programme every year, for five years. easyJet has kick-started this strategic partnership with backing for FLIO and LuckyTrip, two travel start-ups with a focus in in airport experience and travel inspiration.

easyJet flies on more of Europe’s most popular routes than any other airline. easyJet carries over 78 million passengers annually, of which more than 12 million are travelling on business. easyJet flies over 279 aircraft on more than 880 routes to over 140 airports across 31 countries. More than 300 million Europeans live within one hour’s drive of an easyJet airport.

Innovation is in easyJet’s DNA – from our launch almost 20 years ago when we changed the way people fly to the present day where we lead the industry in digital, web, engineering and operational innovations to make travel more easy and affordable for our passengers.

About Rakuten
Rakuten, Inc. (TSE:4755) is a global leader in internet services that empower individuals, communities, businesses and society. Founded in Tokyo in 1997 as an online marketplace, Rakuten has expanded to offer services in e-commerce, fintech, digital content and communications to more than 1 billion members around the world. Since 2012, Rakuten has ranked in the top 20 of Forbes Magazine’s annual “World’s Most Innovative Companies” list. The Rakuten Group has over 14,000 employees, and operations in 29 countries and regions.

About Immfly
Headquartered in Barcelona, Immfly was founded in 2013 with the support of more than 50 influential multinational partners. The company is leading the development of on-board digital platforms within Europe, helping transport companies to strengthen their customer loyalty by increasing their “Net Promoter Scores” amongst passengers, and encouraging the creation of new ancillary revenues through the sponsorship and e-commerce available on the platform.