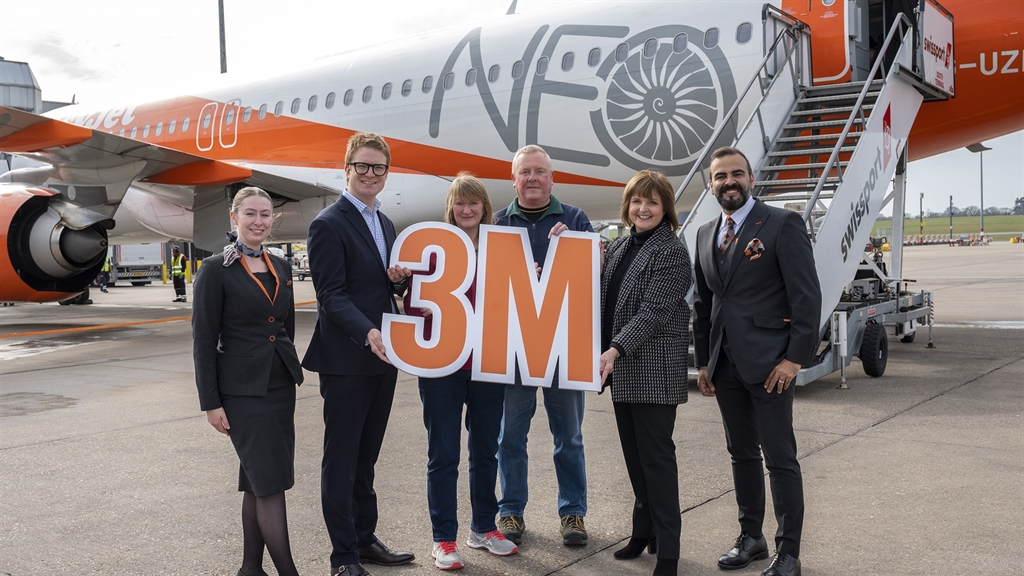 To mark the occasion the airline surprised two lucky travellers Terri and Stephen from Rowley Regis, flying today from Birmingham to Belfast, with a pair of easyJet return flights.

The airline has also announced today (MARCH / 15 2022) that it will be launching a brand new, twice-weekly service to Faro in Portugal. Seats go on sale on from Thursday 17th March, with low fares available from just £24.99*. Flights will depart on Wednesdays and Sundays throughout the summer season between 1 May and 26 October 2022.

The new route comes following new summer services to Malaga and Palma de Mallorca which were launched last year and also set to take off for this first time this summer, as the airline continues to expand its leisure destination offering from Birmingham, to some of Europe’s best beach resorts.

The airline has seen sustained growth in recent months in Birmingham and its operations are now larger ever before. This summer, easyJet is set to operate nearly four times more seats from Birmingham than it did in summer 2019, serving more destinations and providing more choice for customers in the Midlands to enjoy a long-awaited summer holiday and reconnect with family and friends.

easyJet now serves customers in Birmingham and the surrounding region with convenient connections to eight airports across the UK and Europe, providing access to a range of city, ski and beach destinations via Belfast International Airport, Edinburgh, Glasgow, Amsterdam, Geneva, Palma, Malaga – and now Faro.

“We are delighted to celebrate carrying over 3 million passengers and announce yet another new route from Birmingham today. Over the past months we’ve continued growing our operations at Birmingham, serving more customers, and offering more connections to a greater range of destinations to ever before – which is especially exciting as we know that so many people have missed being able to holiday over the last two years. With low fares from just £17.99* and many destinations no longer requiring testing restrictions, now is a great time to book with easyJet.

“We remain focused on offering great value and convenient connections for our customers in the Midlands, whether they are travelling on their long-awaited holidays, reuniting with friends and family or getting back to business, and I am thankful to our fantastic customers to choosing to travel with us.

“This summer we’ll be bigger than ever at Birmingham and we can’t wait to welcome more customers onboard.”

“This is an important milestone to celebrate with easyJet.  Our partnership with the airline has grown over the years and it is great that today we see the airline carry its three millionth passenger and additionally welcome the announcement of a new route to Faro.  This popular Portuguese destination is a firm favourite for customers flying From Birmingham Airport and we welcome the extra capacity on this route.  We look forward to continuing to work with easyJet to offer our customers additional routes in the near future.”

The airline launched operations at Birmingham airport 15 years ago, flying its first customers from Birmingham to Geneva in 2007. Since then, easyJet has continued to return to Birmingham and in recent years established more services than ever before for both leisure customers, those visiting family and friends, and business travellers.

Flights are now available to book at easyJet.com and via the mobile app.

easyJet serves 19 UK airports, offering over 411 routes to over 124 destinations from the UK to Europe, the Middle East and North Africa. To discover more about easyJet’s UK network and to book, visit easyJet.com.

*Flights one way per person including taxes