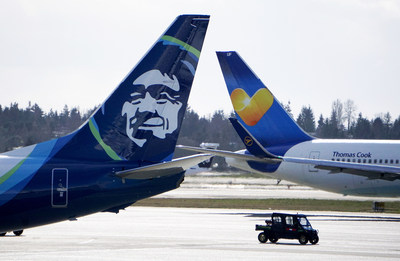 Alaska is raising the bar to allow Mileage Plan members to travel and earn miles to more than 900 destinations around the globe through a unique network of international partners. Over the last two years, Alaska Airlines has made several enhancements to its best-in-class Mileage Plan program including three new global partnerships and adding ways to earn miles faster, get elite status sooner and redeem miles for award travel.

“We are continuing to bolster our international partner portfolio, giving our guests access to more of the globe. Condor provides a key link, with its nonstops from seven Alaska gateways to Europe and beyond,” said Andrew Harrison, Alaska Airlines executive vice president and chief commercial officer. “Condor’s nonstop flights from Seattle to Germany allow our guests to step on the plane at Sea-Tac and step off in Europe, earning Mileage Plan miles along the way.”

“We have enjoyed a longstanding partnership with Alaska Airlines that dates back eight years, prior to our introduction of nonstop Seattle service,” said Ralf Teckentrup, CEO of Condor. “As Condor embarks this summer on our largest expansion of new U.S. gateways and routes, we are thrilled to expand our relationship with Alaska Airlines to offer our customers the opportunity to earn miles to all of our 75 destinations around the world.”

Alaska Airlines and Condor have been connecting passengers between the two carriers on flights from Europe and North America, using an airline industry partnership called an “interline agreement”, but until now have not had a mileage partnership. With the new mileage partnership, travelers on Alaska Airlines and Condor will still be able to connect seamlessly, while also earning miles and exchanging it for award travel in Mileage Plan.

The number of travelers flying Condor between North America and Europe has more than doubled in the last three years, with Condor’s newly introduced trans-Atlantic routes. By summer, Condor will serve 16 cities in North America, including Alaska’s West Coast cities and its newest gateways of New Orleans and Pittsburgh.

Condor has been flying its guests to the most beautiful holiday destinations in the world since 1956. The traditional airline is a 100 percent subsidiary of Thomas Cook GmbH. On an annual basis, more than seven million passengers fly with Condor to about 75 destinations in Europe, America, Africa and Asia. The route network of the holiday airline includes over 230 destinations through cooperation with airlines in the destination areas. Condor was merged with the airlines Thomas Cook Airlines UK, Thomas Cook Airlines Belgium and Thomas Cook Airlines Scandinavia in October 2013, to form the Thomas Cook Group Airlines. All companies within the Thomas Cook Group plc. are united under a common symbol: The Sunny Heart. To express their common identity, the aircraft of the Thomas Cook Group Airlines show the sunny heart on their aircraft trails. The sunny heart also shows that Condor is putting its heart into every flight. The fleet of the Thomas Cook Group is comprised of 95 modern and environmentally friendly aircraft, of which 45 aircraft are from the Condor fleet: nine Airbus A320s, seven Airbus A321s, thirteen Boeing 757-300s and sixteen Boeing 767-300s. The aircraft are maintained by the airlines’ own technical companies. The holiday airline has won numerous awards in recent years, including the award for “Service Champion 2016” in the Gold Category.

Alaska Airlines, together with Virgin America and its regional partners, flies 40 million customers a year to 118 destinations with an average of 1,200 daily flights across the United States and to Mexico, Canada, Costa Rica and Cuba. With Alaska and Alaska Global Partners, customers can earn and redeem miles on flights to more than 900 destinations worldwide. Learn more about Alaska’s award-winning service and unmatched reliability at newsroom.alaskaair.com and blog.alaskaair.com. Alaska Airlines, Virgin America and Horizon Air are subsidiaries of Alaska Air Group (NYSE: ALK).