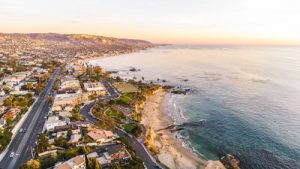 MONTREAL, CANADA, 2020-Mar-05 — /Travel PR News/ — Air Canada today (March 3, 2020) announced it will launch non-stop service between Vancouver and Santa Ana in Orange County, California beginning June 15, 2020, subject to final airport authority approvals. Special introductory fares from Vancouver to Orange County start as low as $187 CDN one-way, all in. Tickets are now available for purchase at aircanada.com or through travel agents until March 17, 2020 for travel between June 15, 2020 and September 30, 2020.

“We are very pleased to announce new daily, year-round flights from Vancouver to Orange County as we strategically expand our transborder network into the populous greater Los Angeles area,” said Mark Galardo, Vice President, Network Planning and Alliances at Air Canada. “In addition to offering direct flights to the iconic tourism, sports and entertainment attractions that Orange County is known for, our new flights will also conveniently link the increasing start-up, tech and innovator businesses that both Vancouver and southern California are home to.  Air Canada’s Orange County flights will also offer a wide array of connections across Canada and to Australia and India via our YVR hub.”

“California has and will continue to be a high priority market for our export clients given the close proximity and significant opportunity this region represents. We are pleased to see that Air Canada will be making California even more accessible for British Columbia based businesses,” says Austin Nairn, Executive Director of World Trade Centre Vancouver.

“California is an increasingly important market for Greater Vancouver businesses. Greater connectivity will provide the foundation for a deeper economic, social and cultural partnership to the benefit of both of our regions,” said Bridgitte Anderson, President and CEO of the Greater Vancouver Board of Trade.

“The shared California/Canada commitment to building new companies and expanding our economies has connected the two trade partners and now with daily non-stop flights between Orange County and Vancouver, we have a convenient portal for business and leisure travel,” said Bryan Starr, President and CEO, Greater Irvine Chamber and Destination Irvine.

“Vancouver and Orange County are dynamic tech markets in a North-South corridor known for innovation, creativity and excellence. A new non-stop daily flight from Air Canada between our cities means more opportunities to collaborate and combine our strengths to do more together as we continue to define what comes next,” said Stephen Armstrong, president, MAPLE Business Council.

The Air Canada Airbus A319 aircraft offers a choice of two cabins configured with 14 Business Class and 106 Economy seats all featuring personal in-flight entertainment, as well as wi-fi onboard. All Air Canada flights provide for Aeroplan accumulation and redemption and, for eligible customers, access to priority services, Maple Leaf Lounges and other benefits.

Air Canada is the leading carrier between Canada and California, offering up to 43 daily flights from Vancouver, Calgary, Edmonton, Toronto and Montreal to seven destinations in California, including Los Angeles, San Diego, San Francisco, San Jose, Sacramento, Palm Springs and, beginning June 15, Orange County. Customers who fly Air Canada will understand why it is Skytrax’s 2019 Best Airline in North America, and also why it was named the top airline in North America for its services by readers and the advisory board of the influential Business Traveler USA and Global Traveler publications, respectively.

Air Canada is Canada’s largest domestic and international airline serving nearly 220 airports on six continents. Canada’s flag carrier is among the 20 largest airlines in the world and in 2019 served over 51 million customers. Air Canada provides scheduled passenger service directly to 62 airports in Canada, 53 in the United States and 101 in Europe, the Middle East, Africa, Asia, Australia, the Caribbean, Mexico, Central America and South America. Air Canada is a founding member of Star Alliance, the world’s most comprehensive air transportation network serving 1,250 airports in 195 countries. Air Canada is the only international network carrier in North America to receive a Four-Star ranking according to independent U.K. research firm Skytrax, which also named Air Canada the 2019 Best Airline in North America. For more information, please visit: aircanada.com/media, follow @AirCanada on Twitter and join Air Canada on Facebook.