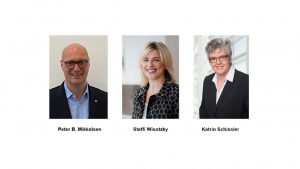 “Peter B. Mikkelsen is an excellent hotel manager, and we are delighted to have secured his services in Berlin,” said Thomas Willms, CEO, Deutsche Hospitality. “He has performed impressively at the Steigenberger Hotel in Cologne and also boasts a great track record in many further international roles outside our company.” Mr. Willms went on: “I am all the more pleased that he will be the Area Manager overseeing the opening of the Steigenberger Airport Hotel in Berlin alongside the new General Manager Steffi Wisotzky. The IntercityHotel Berlin Hauptbahnhof will also be gaining an experienced leader in the person of Katrin Schissler. We would like to take this opportunity to offer our thanks to Gabriele Maessen, the outgoing Area Manager East for Steigenberger Hotels & Resorts.”

Peter B. Mikkelsen began his career at the Steigenberger Graf Zeppelin in Stuttgart, where he trained in the occupation of hotel specialist. He then went on to complete a degree in Hotel Administration before gathering experience at business hotels operated by Sheraton, Hilton and Rezidor and securing the position of General Manager at the Radisson Blu in Warsaw. Mr. Mikkelsen has been General Manager of the Steigenberger Hotel Cologne since 2016.

Steffi Wisotzky has been with the hotel group for 20 years. Her most recent role was at the IntercityHotel Berlin Hauptbahnhof, which she helped to make one of the brand’s most successful performers. Prior to this, Ms. Wisotzky was responsible for the opening of the IntercityHotel Dresden, which she also managed between 2007 and 2012. She began her Steigenberger career at the Steigenberger Parkhotel Dresden-Radebeul. In 2013, Steffi Wisotzky won an MKG Group Hospitality Award in the category of Best General Manager.

Deutsche Hospitality brings together five separate hotel brands under a single umbrella. Steigenberger Hotels & Resorts has 60 hotels housed in historic traditional buildings and lively city residences and also offers health and beauty oases set at the very heart of nature. MAXX by Steigenberger is a new and charismatic concept which places the focus on the essential in accordance with its motto “MAXXimize your stay”. Jaz in the City branded hotels reflect metropolitan lifestyle and draw upon the local music and cultural scene. IntercityHotel offers more than 40 upper mid-range urban hotels, all of which are located within easy walking distance of railway stations or airports. And Zleep Hotels – a well-known and successful hotel brand in Scandinavia which offer service and design at a great rate for the many. The portfolio of Deutsche Hospitality currently includes almost 150 hotels on three continents 30 of which are in the pipeline.