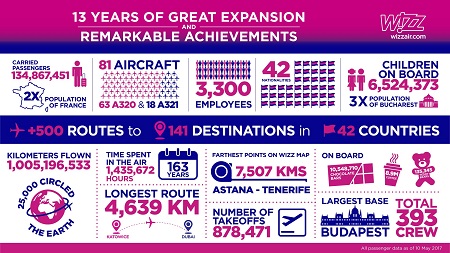 Budapest, Hungary, 2017-May-21 — /Travel PR News/ — Wizz Air celebrates today the 13th anniversary of its very first flight. In the years that have passed since then, WIZZ has gone on to become the largest low cost airline in Central and Eastern Europe and achieve some remarkable milestones. Now, Wizz Air customers can join in with the celebration and discover 141 exciting destinations across the Wizz Air low-fare network, with a discount up to 30%* available on this Anniversary Seat Sale Day, on all routes for new bookings made until midnight.

Wizz Air is particularly excited to be able to announce the winners of the WIZZ Youth Challenge, the first international WIZZ case study competition. Out of 978 registered teams, the top 40 presented their projects to a jury including members of Wizz Air’s senior management team and other experts. The winning team is from Croatia and was awarded with free unlimited travel on the WIZZ network for a year.

Wizz Air believes that hard work should be balanced with an active lifestyle and thus supports several international running events across Europe in cities such as Cluj-Napoca, Kosice, and Skopje. More than 35,000 runners from more than 50 countries have already taken part in a Wizz Air running events in 2017, with more to come in Budapest, Kyiv and Sofia. So as well as taking the opportunity to fly with WIZZ in the air, why not sign-up for one of these exciting running events?

In the past 13 years, WIZZ has flown 1 billion km, the equivalent of circling the Earth 25,000 times and carried nearly 135 million passengers. Each aircraft in Wizz Air’s fleet of 81 Airbus A320 and A321 aircraft – one of the youngest in Europe – flies on average over 12 hours a day and, together, they have performed almost 880,000 flights spending more than 1.4 million hours in the air, which translates into a remarkable 163 years of continuous flying. Wizz Air currently offers over 500 routes from 141 airports in 42 countries, having one of the most diverse networks of any European low cost airline, from Tenerife in the west to Astana in the east and with the longest route being Katowice-Dubai at 4,639 km – and still there are 40 more new routes which will start operating in 2017

In the 12 months to 30 April 2017, over 24 million customers took the opportunity to travel with WIZZ, enjoying the low fares, easy booking system and excellent on-board service. Day in day out, almost 3,300 aviation professionals of 42 different nationalities deliver superior onboard service and WIZZ business supports over 17,000 jobs** in associated industries across the network.

József Váradi, the Chief Executive Officer of Wizz Air said:” 13 years after Wizz Air’s first flight, we’re celebrating the WIZZ team’s success in achieving remarkable results and continuing strong growth. So far, we’ve given the opportunity to almost 135 million passengers to discover Europe and beyond at Wizz Air’s low fares and to travel on one of Europe’s youngest fleets while enjoying the great onboard service delivered by every one of our almost 3,300 colleagues. Wizz Air now connects 141 destinations in 42 countries, where our flights strengthen business relations between countries as well as stimulate the local tourism and aviation industries. Celebrate today with Central and Eastern Europe’s largest low cost carrier at prices even lower than normal. The whole WIZZ team looks forward to welcoming you onboard very soon.”

* The discount applies on fares including taxes, non-optional charges, and one small cabin bag. The discount is valid for new bookings only, made on wizzair.com or via the mobile app on 19th May