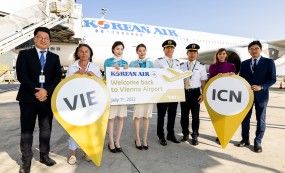 VIENNA, Austria, 2022-Jul-07 — /Travel PR News/ — Korean Air is now starting regular passenger flights between Vienna and Seoul again. Since July 1, 2022, the South Korean airline has again been connecting Vienna with the South Korean capital three times a week. After the flight connection was interrupted due to the COVID-19 pandemic, Korean Air is now resuming flights between South Korea and Austria and is even celebrating a small anniversary: ??the South Korean national airline has been operating the Seoul-Vienna route without interruption for 15 years, with the exception of the Corona crisis, the first flight took place on March 28, 2007.

“The Asian market is slowly coming back after the pandemic-related disruption, and I am pleased that Korean Air is resuming its regular Seoul-Vienna service. We have a long-standing partnership with Korean Air in the passenger and freight sectors. The airline has had a presence at Vienna Airport since the 1990s and has been coming to Vienna regularly since 2007. Since then, Korean Air has developed very well at the location and established itself as an important airline partner for business and tourism in both countries,” explains Julian Jäger, Joint CEO and COO of Vienna Airport.

After the corona-related break, Korean Air is now resuming its regular flight connections to Vienna: The airline is now flying three times a week – Wednesday, Friday and Sunday – from Seoul to Vienna with Airbus 330-200 und Boeing 787-9 Dreamliner. Korean Air and Vienna Airport can already look back on a long history together: from June 1990 to August 1992, the airline operated the Vienna-Seoul route once a week and since 2004 Korean Air has been operating regular cargo flights to Vienna. Since March 28, 2007 – for 15 years now – the airline has been coming to Vienna continuously, with the exception of the interruption in 2020 and 2021 caused by the pandemic. Korean Air has thus become an important airline partner for business and tourism traffic between Asia and Austria.

Korean Air was founded in 1969. Today the airline operates a fleet of 154 aircraft and connects the South Korean capital Seoul with numerous destinations around the world. More information about Korean Air and booking options can be found at www.koreanair.com.