The herd, consisting of 37 animals from Settlers Pond, an animal rescue facility in Beecher, IL, includes goats, sheep, llamas and burros. Additional animals will be at O’Hare in the coming weeks. Once all of the animals have arrived, there will be an increase of 11 animals over last year.

Most of the animals arrived back at the airport in late July 2014 and began their work on up to 120 acres of land on several sites on O’Hare property that have been identified for grazing. All the sites are located in areas away from or separated from the airfield by security fencing. The sites include hilly areas along creeks or streams and roadway right-of ways that are overcrowded with dense scrub vegetation that’s difficult to maintain with traditional landscaping equipment.

With nearly 8,000 ​acres of property, O’Hare has a very diverse landscape that includes areas that can become overgrown, particularly during the later summer months.

In 2013, the herd grazed on three different sites from July through November, eating five acres of dense vegetation that included poison ivy and other noxious weeds that they seem to find delicious!

This year, the CDA has expanded its partnership with USDA Wildlife biologists at O’Hare, who work at O’Hare year-round. The staff will quantify the results and benefits of the grazing herd on airport property.

You may also be interested in:  CDA invites chefs to join the Channel Your Inner Chef competition at O’Hare International Airport

In addition, the CDA has added a new partnership with the 4HYouth Program at the University of Illinois Extension in St. Charles, Illinois, to involve students in the care of such rescue animals at Settlers Pond.

“On behalf of Chicago Mayor Rahm Emanuel, the CDA is very pleased to have this unique program back at O’Hare this season. This is another example of an aviation industry green initiative that also complements the Mayor’s commitment to sustainability at Chicago’s airports and the City of Chicago,” said CDA Commissioner Rosemarie S. Andolino. “The continuation of this grazing herd, and additional partnership with the USDA Wildlife Service and 4H, will provide environmental and operational benefits for the airport and the community.”

Central Commissary Ho​ldings , LLC, located at 1021 W. Armitage Ave., Chicago, IL,is administrating the contract for the herd.  Staff from Settlers Pond cares for the animals for during the time they are on airport property. The herd will remain supervised on airport property during the week and housed overnight in a transport trailer nearby during evening hours.

Some of the benefits of the grazing herd include an alternative to toxic herbicides, and, in some cases, elimination of the use of equipment that produce emissions, and removal of overgrown areas reduction of wildlife habitat that can create safety concerns for flight operations in and around O’Hare.

The grazing herd will remain at O’Hare will continue until cold weather no longer permits accessibility to vegetation.​ 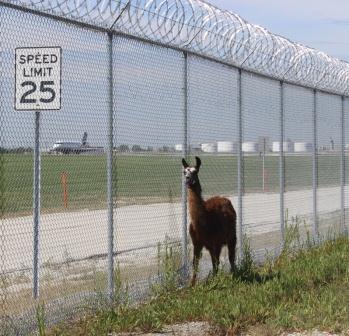