Bangkok, Thailand, 2013-12-02 — /travelprnews.com/ — The ongoing anti-government protests in Bangkok, which had been normal to peaceful for 32 days since 30 October 2013, has turned volatile as of yesterday but are contained within one location near Government House and the Parliament where riot police fired tear gas canisters and used water cannon to hold off protesters from entering important state offices.

Today, volatile situations remain in the areas surrounding Government House and the Parliament and the Metropolitan Police Bureau. All 14 roads leading to the two locations are closed to traffic, and tourists are advised to avoid these areas.

The situation at Ramkhamhaeng University, following clashes between university students and pro-government “red-shirt” supporters that lasted from Saturday (30 November 2013) evening until yesterday afternoon, has returned to normal as of this morning. Traffic on Ramkhamhaeng Road is now open to motorists as usual.

No tourists are hurt or affected by the volatile situations both at Ramkhamhaeng University and near Government House and the Parliament.

During today, the following locations are where the anti-government protests take places or where the protesters gather:

Two most sensitive areas that tourists should avoid today are the areas surrounding Government House and the Parliament and the Metropolitan Police Bureau.

Outside of Bangkok, the anti-government protesters are also rallying at several provincial administration halls.

For tourists visiting the kingdom, it should be stressed that foreigners and/or tourists have not been targeted in the ongoing political protests.

However, tourists are advised to be vigilant and avoid areas where crowds may gather. Given the large number of people attending rallies at the five main locations as well as the above mentioned two most sensitive locations, roads around or within the areas maybe temporarily closed to traffic. Heavy road traffic at certain times can also be expected in roads leading to the protest areas.

Tourists are advised to check travel route and road traffic situation to avoid getting caught in traffic or they can use other means of transportation to getting around in Bangkok, including BTS Skytrain, MRT Subway, Suvarnabhumi Airport Rail Link’s Express and City Lines, and water-transport.

It’s business as usual in Thailand.

Albeit the volatile political situations in Bangkok, life in the Thai capital and all other areas of Thailand continues as per normal. Tourist attractions and activities as well as businesses in Bangkok and other provinces are open and operating as usual.

Siam Center, Siam Discovery, Siam Paragon and CentralWorld Shopping Complexes on Rama I Road as well as Major Cineplex on Ramkhamhaeng Road are open as per normal.

Tourist attractions are open and operating as per normal.

To avoid heavy road traffic at certain times, tourists can use BTS Skytrain, MRT Subway, ferry, boats and hotel’s converted rice barges to many attractions, such as,the Grand Palace, the Temple of the Emerald Buddha, the Temple of Dawn, ASIATIQUE The Riverfront, and Siam Paragon, CentralWorld and Terminal 21 Shopping Complexes.

For live images of Thai tourist destinations, check out these THAI LIVE CAM streaming cameras that present a number of stunning preset views of Thailand’s most famous and popular cities.

These provinces’ administration halls are located in official designated areas, and are not where tourists normally go to or where tour companies include in the tour programme.

International and domestic airlines are operating flights between Bangkok and Thai cities, as well as destinations around the world, as per normal.

Thailand’s main gateway, Suvarnabhumi Airport, in Bangkok and all other international and domestic airports throughout the country are operating as per normal. Transportation to and from Suvarnabhumi and Don Mueang International Airports into central Bangkok as well as into tourist destinations southeast and southwest of Bangkok; such as, Pattaya, Hua Hin, Ko Samet and Ko Chang are operating as per normal.

Suvarnabhumi Airport has advised air travellers of possible heavy road traffic and a lack of taxis resulting from the protests in Bangkok. Commuters are advised to use public transport such as BTS Skytrain, Airport Rail Link, public buses and vans, and limousine services. Air travellers are also advised to allocate more time before flight depart or at least three hours.

In addition, Suvarnabhumi Airport has opened a passenger centre at the CIP 5 room on the 3rd floor of the passenger terminal to provide assistance to passengers whose air travels have been affected by the protests. Air travellers can contact the centre through Tel: +66 (0) 2 132 1999, Fax: +66 (0) 2132 8999. To check flight schedule, air travellers can contact Tel: +66 (0) 2132 1888. The centre and all contact numbers are available 24 hours daily.

The State Railway of Thailand and the Transport Co., Ltd., (inter-provincial bus service) are operating as per normal. The Bangkok Mass Transit Authority is operating its city bus routes as per normal, although some routes are temporarily rerouted.

There is no reason at all to avoid Bangkok, which remains a popular tourist destination. However, tourist can also spend their holidays in other Thai cities, which are located within 1 or 2 hour travelling time from Bangkok through direct connecting flights from Suvarnabhumi Airport.

The Thai Government has announced the enforcement of the Internal Security Act (ISA) in all districts of Bangkok and Nonthaburi, Bang Phli district of Samut Prakan and Lat Lum Kaeo district of Pathum Thani until 31 December to maintain law and order.

The law does not prohibit nor obstruct peaceful demonstration held within the bounds of the law, but it enables security agencies – police, military and civilian – to effectively prevent and mitigate, as much as possible, undue disruption or impact on the safety of the general public.

Tourists need not be alarmed of the presence of security forces and checkpoints in Bangkok. Police are deployed to provide security in the city. Security has been stepped up to prevent ill-intentioned people from inciting violence. Traffic police are also stepping up efforts to ensure traffic flow in the city. 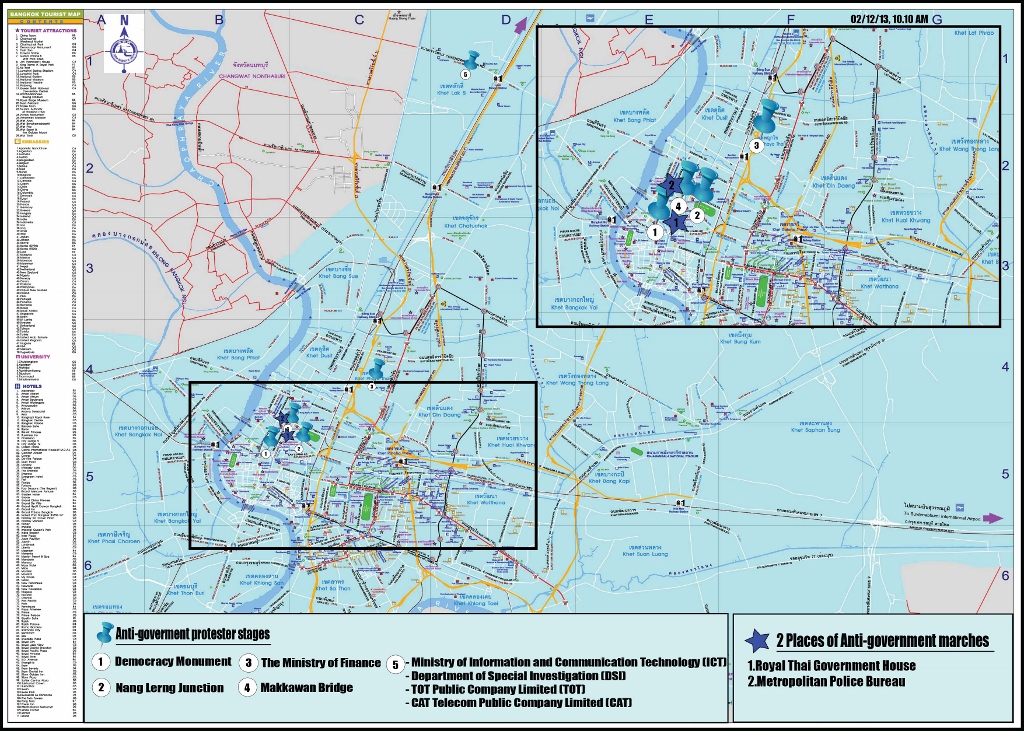