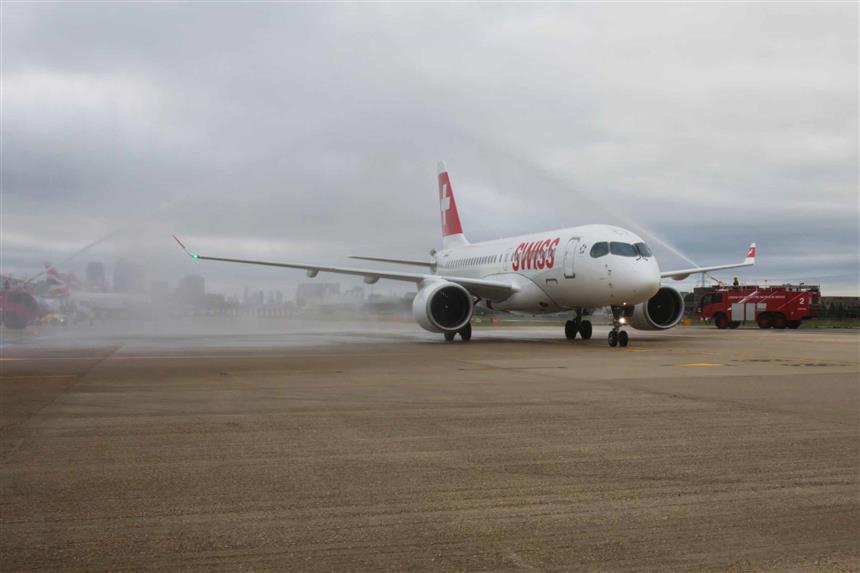 With its short runway and its steep landing approach, London City Airport makes particular demands on pilots, who are required to undergo additional training for such operations. “We have prepared our pilots down to the finest detail to perform our new scheduled Bombardier C Series flights to London City,” says Peter Koch, SWISS’s C Series Fleet Chief. “And we’re delighted that we can now offer all the many attractions of the C Series, in inflight comfort and more, on this important route.”

As well as the additional pilot training, the aircraft itself has had to be certificated to perform the steep landing approach that service to London City requires. The aircraft’s manufacturer, Bombardier of Montreal, Canada, obtained this in April of this year. “The C Series is the only commercial aircraft specifically designed for operations at challenging airports,” says Rob Dewar, Vice President, C Series Aircraft Program, Bombardier Commercial Aircraft. “We are very proud of its performance, and we congratulate SWISS on this first CS100 commercial flight to London City.”

London City Airport operator is also pleased at the aircraft’s arrival. “The inaugural commercial flight of the Bombardier C Series by Swiss International Air Lines is a landmark moment for London City Airport, and it is a pleasure to welcome the first passengers and crew from Zurich, following five years of preparation,” says Richard Hill, Chief Commercial Officer, London City Airport. “This next-generation aircraft is one of the quietest in operation, with greater fuel efficiency and longer range, setting a new standard for SWISS operations and London City.”

The Bombardier C Series aircraft set new benchmarks in comfort, operating economics and environmental terms. With its low-noise-emission credentials, the C Series is also known as the “Whisperjet”. SWISS is acquiring its C Series aircraft primarily to replace its Avro RJs, which were used to commence its scheduled services to and from London City precisely 25 years ago. The last commercial SWISS Avro RJ100 flight will be from Zurich to London City and back on Monday 14 August.

For more on media relations.

For enquiries regarding specific flights, routes or aircraft please contact the airline directly.