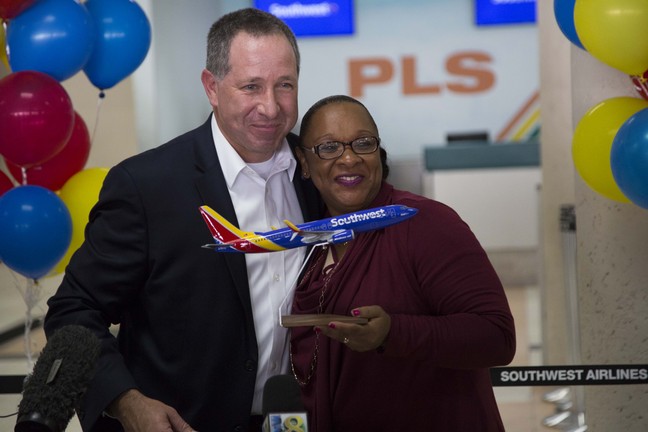 “Three new routes bring Southwest’s needed value for Floridians hoping to hit the beach in Provo’s world-famous Grace Bay, hike up the crater at Poas volcano near Costa Rica’s capital city, or have a carefree weekend in a resort in Punta Cana,” said Steve Goldberg, Southwest’s Senior Vice President of Operations & Hospitality who also serves as the carrier’s Executive Sponsor of Florida. “With convenient connections for Orlando, Tampa, and dozens of cities across our domestic network, these international destinations are now reachable on Southwest where there are no change fees and bags fly free.”

* There are no change fees, though fare differences might apply. First and second checked pieces of luggage, size and weight limits apply.

In a partnership with Broward County, Southwest continues work to transform and expand Terminal 1 at FLL into a vastly improved facility with additional gates, security screening, concessions, and border processing capacity. Southwest launched additional international service from FLL in June 2017.

Southwest recently extended its bookable flight schedule through early August 2018 bringing new, international service on Saturdays next summer betweenHouston and Grand Cayman. In addition, service between Cancun and both Pittsburgh and Raleigh-Durham will operate nonstop on Saturdays beginning June 9, 2018, subject to governmental approvals. The summer 2018 flight schedule is Southwest’s largest-ever for Cancun with nonstop service from 16 gateway airports in the U.S. peaking at 27 departures to Cancun on Saturdays.

Southwest also increased summer season 2018 service to Puerto Rico with daily flights between San Juan and Chicago Midway, which had operated only on weekends in Summer 2017, and augmented daily seasonal service between San Juan and Houston Hobby, with a second flight on Saturdays and Sundays beginning June 9, 2018.

“We’re investing in the Caribbean with an optimistic outlook on travel and tourism as our Hearts remain with those still facing significant challenges,” Goldberg added. Following the hurricanes of 2017, Southwest coordinated with government officials to operate two dozen unscheduled flights to Puerto Rico in support of relief efforts by transporting people and much-needed supplies. “While a courageous recovery continues, the best thing many can do now is simply take a vacation, make a business trip, and contribute to a greater awareness that the Caribbean is back in business.”

ABOUT SOUTHWEST AIRLINES CO.
In its 47th year of service, Dallas-based Southwest Airlines Co. (NYSE: LUV) continues to differentiate itself from other air carriers with exemplary Customer Service delivered by more than 55,000 Employees to a Customer base topping 115 million passengers annually, in recent years. Southwest became the nation’s largest domestic air carrier in 2003 and maintains that ranking based on the U.S. Department of Transportation’s most recent reporting of domestic originating passengers boarded. During peak travel seasons, Southwest operates more than 4,000 weekday departures among a network of 100 destinations in the United States and ten additional countries. Southwest has announced its intention to sell tickets in 2018 for service to Hawaii, subject to requisite governmental approvals.

Southwest coined Transfarency® to describe its purposed philosophy of treating Customers honestly and fairly, and low fares actually staying low. Southwest is the only major U.S. airline to offer bags fly free® to everyone (first and second checked pieces of luggage, size and weight limits apply, some carriers offer free checked bags on select routes or in qualified circumstances), and there are no change fees, though fare differences might apply.

As launch customer of the Boeing 737 MAX 8 in North America, the Company operates the largest fleet in the world of Boeing aircraft, all of which are equipped with satellite-based WiFi. Customers who connect to the WiFi network may use their personal devices to view on-demand movies and television shows, as well as nearly 20 channels of free, live TV.

With a bold new look first unveiled in 2014, Southwest is progressing through a multi-year refresh of its fleet to showcase the carrier’s Heart: a new logo, aircraft livery, interior design featuring new seats, Employee-designed uniforms, and an updated airport experience, all of which showcase a dedication of Southwest Employees to connect Customers with what’s important in their lives.

From its first flights on June 18, 1971, Southwest Airlines launched an era of unprecedented affordability in air travel described by the U.S. Department of Transportation as “The Southwest Effect,” a lowering of fares and increase in passenger traffic wherever the carrier serves. With 44 consecutive years of profitability, Southwest is one of the most honored airlines in the world, known for a triple bottom line approach that contributes to the carrier’s performance and productivity, the importance of its People and the communities they serve, and an overall commitment to efficiency and the planet. The 2016 Southwest Airlines One Report™ can be found at SouthwestOneReport.com.

Media Contacts:
Visit the Southwest Newsroom at swamedia.com for multi-media assets and other Company news.