Jersey, 2014-04-15 — /Travel PR News/ — “My admiration for Ranulph Fiennes is unbounded and thank God he exists. The world would be a far duller place without him”
HRH Prince Charles.

Tim Cook, Island Director for Lloyds Bank event sponsor, said:
We are delighted to be supporting what will be a fascinating evening with world renowned explorer and established author Sir Ranulph Fiennes. We are confident that he will live up to the expectation as being one of the world’s top inspirational, business and motivational speakers. We look forward to this rare opportunity to be in Sir Ranulph’s company here in Jersey.

The Sporting & Dining Club’s John Wannenburgh added
“To be able to secure Sir Ranulph to speak about his incredible career is a coup, and will give the Jersey audience real insight in his truly remarkable achievements. Sir Ranulph is an icon figure and hearing his unique take on life will provide an unforgettable evening’s entertainment.”

Explorer and Mount Everest conqueror Sir Ranulph Fiennes is one of the world’s top inspirational business motivational speakers and has thrilled audiences everywhere with his superbly illustrated and highly motivating talks and presentations. His inspiring message is relevant to anyone – male, female, young or old.

Born in England in 1944 and brought up in Africa, he followed his father’s path into the Scots Greys before joining the elite SAS regiment. He was then the youngest captain in the British Army but was dismissed for blowing up the film set of Doctor Doolittle. After 2 years with the Sultan of Oman’s forces, he began a series of expeditions.

“LOOK FOR A BRAVE SPIRIT” is the Fiennes family motto – and a thousand years of courageous and resourceful ancestors, traceable directly to Charlemagne, live on in Sir Ranulph Fiennes.

Fiennes’ entertaining and inspiring presentations are adapted not only to suit each audience or conference theme but also to keep up with his latest expeditions.

A burning message of personal motivation relevant to any demanding activity in the increasingly competitive business field is guaranteed to fire up any audience with enthusiasm.

His exploits have seen Sir Ranulph travel up the White Nile in a hovercraft; parachuting onto Europe’s highest glacier; forcing his way up 4,000 miles of the mightiest rivers of Canada and Alaska; trekking on foot and unsupported to the North Pole and the great Transglobe expedition in which Fiennes and his companion Charles Burton became the first men in history to reach both Poles.

He was the Personal Representative (Europe) of Doctor Armand Hammer, Chairman of Occidental Oil, from 1984-1992.

In 1993, the Queen awarded him the OBE for human endeavour and charitable services. His expeditions to date have raised over £5 million for charity.

He has published 12 books including “The Feather Men”, which were the UK and Commonwealth’s Number One Bestseller as well as “Mind Over Matter” and “Living Dangerously”.  His current best seller is “Cold”.

In November 2003, Ranulph Fiennes and Mike Stroud completed an incredible seven marathons in seven days: a global adventure that began in the wilds of South America and finished in New York’s concrete jungle.

In March, 2007, despite former frostbite injuries, limited climbing experience and a fear of heights, at the age of 63, Ran successfully climbed the North Face of the Eiger to raise money for the Marie Curie cancer charity after losing his wife, mother and sister to the disease over an 18-month period.

At the age of 65 and at his 3rd attempt, he conquered Mount Everest. He told the BBC, “This is the closest you can get to the moon by walking.”

The elements vital to the success – indeed the survival – of Fiennes and his expedition colleagues include teamwork, leadership, determination, patience, discipline, enthusiasm and creative thinking: all equally important in less hazardous occupations. Building a team with the right character and attitude is of paramount importance. Persistence; tolerance; understanding; planning skills; high organisational ability; fitness for the task in hand; flexibility to meet and beat unexpected obstacles; goal-setting and performing under extreme pressure are clearly all factors in Fiennes’ remarkable endeavours.

This is true in any highly competitive career, whether in business, sport, the arts or academic life.
As a measure of his abilities, Sir Ranulph was selected by IBM New York as their chief motivational speaker out of 700 top international speakers. He spoke at 65 major conferences worldwide.

About the event:
Venue: The Radisson Blu Waterfront Hotel
Date: Thursday 22 May 2014
Tickets: Members @ £65.00 per person, non-members @ £80.00. Evening includes a three-course black tie dinner, with an after dinner speech by Sir Ranulph. There will be a Q&A session after Sir Ranulph’s presentation. 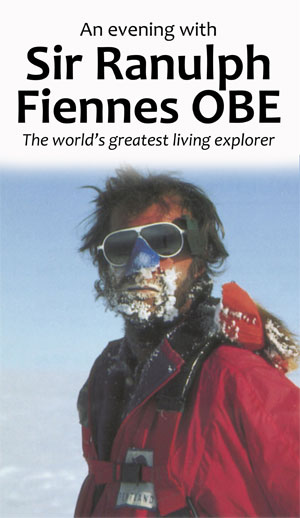