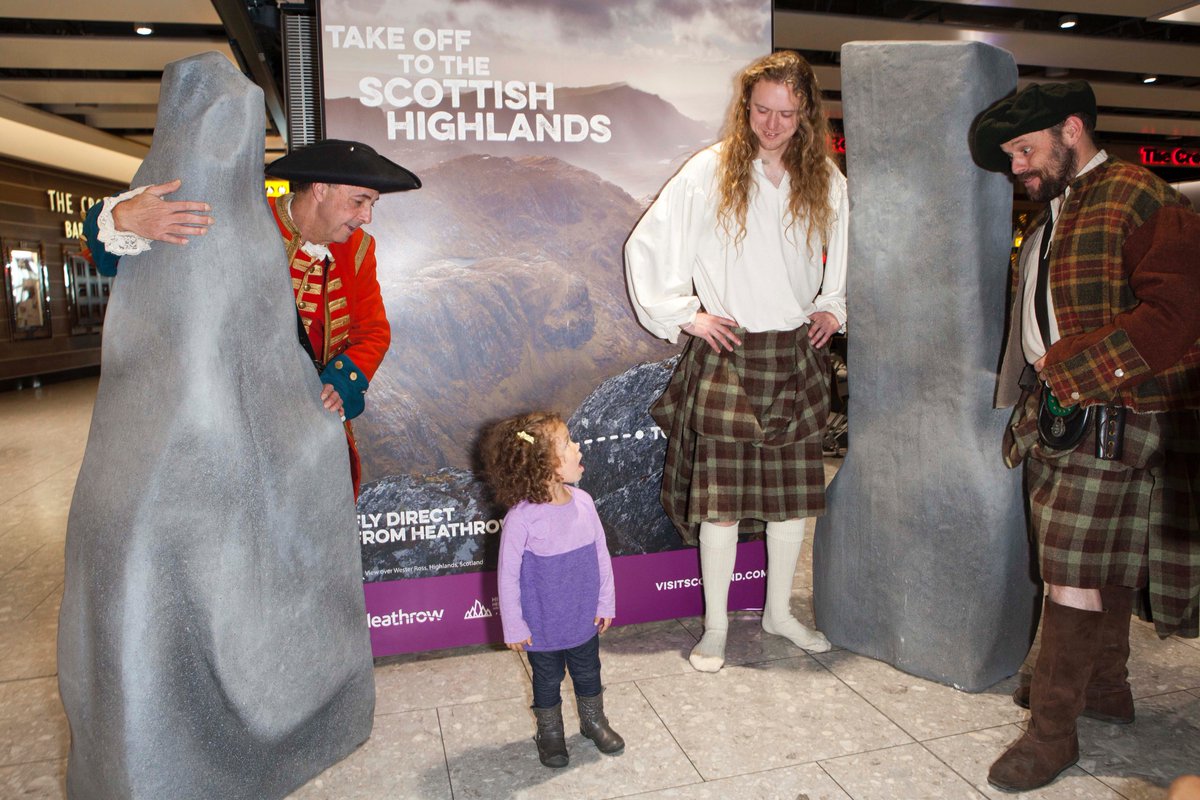 Edinburgh, Scotland, 2016-Nov-27 — /Travel PR News/ — Air passengers in London were forced to do a double take this weekend as kilted Highlanders, a ceilidh band and even the famous Calanais Standing Stones were spotted at Heathrow’s Terminal Five.

The Scottish icons were in the world’s second busiest airport as part of partnership activity between VisitScotland and Heathrow to promote the ease of access between the capital of the UK and Inverness, the capital of the Highlands, with a daily service operated by British Airways.

Last year, the Highlands welcomed more than 2.5 million domestic and international visitors – an increase of 8.4 per cent since 2011*.

This weekend, passengers at Heathrow were invited to dress up in traditional Highland dress and to take selfies with members of the Clanranald Trust for Scotland, while traditional music was provided by Licence to Ceilidh.

Two-metre tall replicas of the Calanais Standing Stones on Lewis also helped bring the Highlands and Islands to Heathrow while, in partnership with Heathrow’s World Duty Free Stores, passengers could sample whisky and shortbread.

A competition to win a Highlands adventure – including two nights at Brodie Castle, a private tour of Culloden Visitor Centre and Battlefield (courtesy of the National Trust for Scotland) – and a bottle of Speyside malt whisky was also on offer.

Malcolm Roughead, Chief Executive of VisitScotland, said:“By collaborating with partners, we are able to showcase Scotland on an international platform and highlight the ease of access to the country. The stunning scenery and rich culture of the Highlands are famous throughout the world, but some may not realise just how easy it is to get there. It was great to be able to bring a little taste of the Highlands to Heathrow – a hugely important airport not only for our domestic visitors, but as a hub for passengers from around the globe.”

Nigel Milton, Heathrow Director of External Affairs, said: “Scotland’s Highlands are home to some of the UK’s most stunning landscapes and richest culture. We’re delighted to be able to share a little bit of Scotland’s magic at this festive time of year with our passengers and encourage more of them to experience the rugged beauty of the Highlands for themselves on our new Inverness route.”

Inglis Lyon, Managing Director of Highlands and Islands Airports (HIAL), said:“The London Heathrow to Inverness route has helped attract thousands of extra visitors to the North of Scotland, supporting tourism initiatives in the Highlands such as the popular North Coast 500.

“Inverness Airport’s passenger numbers have increased 21 per cent in the first six months of the financial year, which we believe is one of the strongest performances of any European airport. The initial British Airways flight numbers are encouraging and prove the significance of Heathrow as a UK hub for Scotland, flying in visitors quicker and more efficiently from all over the world. The service offers tremendous opportunity for our regions excellent tourism businesses.”