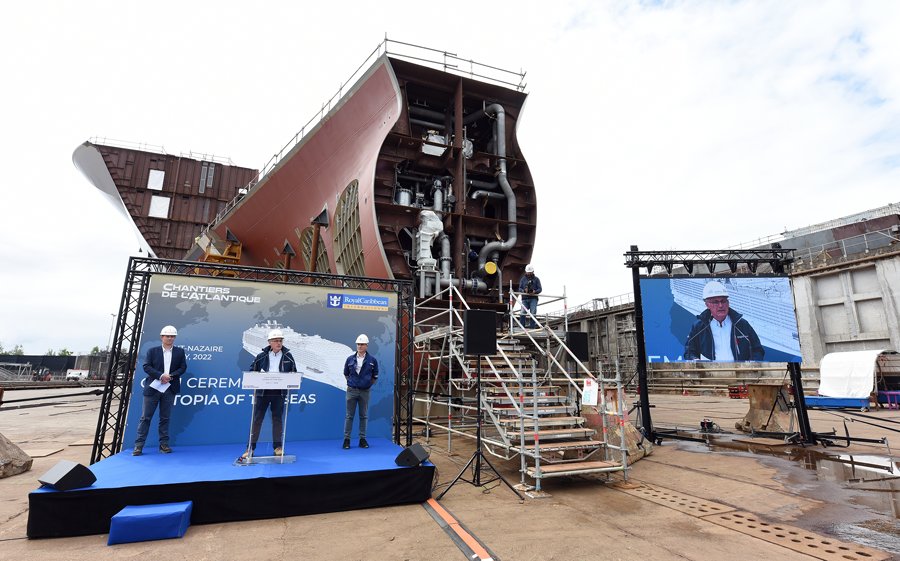 MIAMI, FL, 2022-Jul-05 — /Travel PR News/ — It is full steam ahead on Royal Caribbean International’s upcoming ship, Utopia of the Seas, as construction reaches the first major milestone. Today (July 1, 2022), a keel-laying ceremony for the first LNG-powered ship of the industry-defining Oasis Class took place at the Chantiers de l’Atlantique shipyard in Saint-Nazaire, France. The event celebrated the official start of Utopia’s physical construction ahead of the ship’s bold introduction in spring 2024.

“The keel laying for Utopia of the Seas represents the first milestone of an incredible ship and the next step toward a bolder, thrilling future for Royal Caribbean and vacations,” said Michael Bayley, president and CEO, Royal Caribbean International. “Utopia’s debut in 2024, on the heels of Icon of the Seas setting sail in fall 2023, will build on a new, exciting chapter that is set to redefine family vacations and getaways for all ages in ways we’ll soon reveal.”

At the ceremony, the working teams constructing Utopia watched as newly minted coins were placed on the ship’s first 948-ton steel block. The longstanding maritime tradition calls for coins, representing Royal Caribbean and Chantiers de l’Atlantique, to bring luck during the construction process and while the ship is at sea.

“Today, we are celebrating with Royal Caribbean International an important tradition and milestone for Utopia of the Seas” said Laurent Castaing, General Manager of Chantiers de l’Atlantique. “The construction of Utopia is an exciting opportunity for the Chantiers de l’Atlantique teams that are aiming to make this cruise ship one of the most environmentally friendly ships in the world equipped with new generation dual-fuel engines.”

As the second Royal Caribbean ship that will be powered by liquefied natural gas (LNG), Utopia will also advance Royal Caribbean’s decades-long commitment to the environment. The ship’s LNG technology will join a lineup of the cruise line’s already-established environmentally friendly initiatives on its ships. From shore power connection to waste heat recovery systems, the applications have been developed and continually enhanced as part of Royal Caribbean’s dedication to innovation and making strides toward a clean-energy future.

Royal Caribbean International, owned by Royal Caribbean Group (NYSE: RCL), has been delivering innovation at sea for more than 50 years. Each successive class of ships is an architectural marvel that features the latest technology and guest experiences for today’s adventurous traveler. The cruise line continues to revolutionize vacations with itineraries to 240 destinations in 61 countries on six continents, including Royal Caribbean’s private island destination in The Bahamas, Perfect Day at CocoCay, the first in the Perfect Day Island Collection. Royal Caribbean has also been voted “Best Cruise Line Overall” for 19 consecutive years in the Travel Weekly Readers Choice Awards.