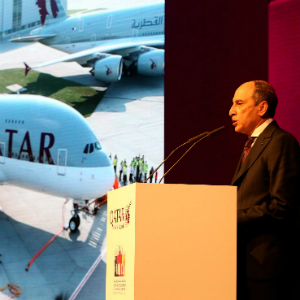 Qatar Airways presented in the Qatar-Germany Business and Investment Forum

DOHA, Qatar, 2018-Sep-10 — /Travel PR News/ — Qatar Airways is proud to participate in the Qatar-Germany Business and Investment Forum, the ninth edition of the premier economic event, which took place in Berlin yesterday, under the patronage of His Highness The Emir of the State of Qatar, Sheikh Tamim bin Hamad Al Thani, and in the presence of Chancellor of Germany, Ms. Angela Merkel, and the Deputy to the President of Germany and Governing Mayor of Berlin, Mr. Michael Müller.

Qatar Airways was honoured to host the official gala dinner of the Qatar-Germany Business and Investment Forum, which was attended by dignitaries and high government officials, including the guest of honor, Sheikh Mohammed bin Abdulrahman Al Thani, Deputy Prime Minister and Minister of Foreign Affairs of Qatar, who addressed the attendees about the special relationship between Qatar and Germany.

Deputy Prime Minister and Minister of Foreign Affairs of Qatar, Sheikh Mohammed bin Abdulrahman Al Thani, said: “I am delighted to be here among friends to celebrate the partnership between Qatar and Germany, which expanded over 60 years and has been built on mutual trust and a common vision. Qatar is proud of its long-standing partnership with Germany, and we hope that this forum will serve as a joint catalyst for the growth of our joint businesses and eceonomic cooperation.”

Qatar Airways Group Chief Executive, His Excellency Mr. Akbar Al Baker, said: “I am delighted that Qatar Airways attended this year’s Qatar-Germany Business and Investment Forum, held here in Berlin, one of our most important European gateways. Qatar Airways is proud to be a key driver of trade between Qatar and Germany, as shown by our continued investment into the airline’s long-standing German operations and the recent 20th anniversary milestone of Qatar Airways’ first flight to Munich, our launch destination in Germany, which began in June 1998.

“In addition to Qatar Airways’ role as a vital trade partner, we were thrilled to announce our new role as the Official Airline Partner to German football giant FC Bayern München AG in March. The uniting of our two brands reflects the importance of sport as a means of bringing people together, something which is at the heart of the airline’s own message – Going Places Together.”

The national carrier of the State of Qatar presented several unique videos, presenting the State of Qatar, Qatar Airways’ 20th year anniversary, and finally, the growth of sports in Qatar in anticipation of the 2022 FIFA World Cup Qatar™.

The Germany-Qatar Business and investment Forum is set to strengthen the ongoing bilateral relations between Qatar and Germany, and to emphasise the long-term benefits of economic and financial collaborations between the two countries.

Germany is one of Qatar’s largest trading partners, with a volume of trade between the two countries reaching nearly 1.9 billion Euros in recent years. Over the years, Qatar has invested in several key industries in the German market, including the automotive, information technology and banking sector, which has lead to more than of 25 billion Euros worth of Qatari investments in Germany.

Qatar Airways currently operates 35 weekly flights between Doha and Frankfurt, Munich and Berlin. Two daily flights from Frankfurt and Munich, and one daily flight from Berlin. By November, all three routes will be operated by a Boeing B777 aircraft.

In July, the award-winning airline became FC Bayern München’s Official Airline Partner under a new long-term sponsorship agreement. The deal between Qatar Airways and FC Bayern München will see the airline’s signature logo on the jersey sleeves of the Deutsche Bundesliga champions, further strengthening the already strong ties between the airline and Germany.

Last month the airline flew the FC Bayern München football team to the U.S. for the 2018 Audi Summer Tour. The renowned German team was transported on board the world’s most technologically-advanced passenger aircraft, the Airbus A350-1000, marking the first time the aircraft touched down in the United States.

Qatar Airways is the global launch customer for the state-of-the-art A350-1000 aircraft, the latest member of the Airbus wide-body aircraft portfolio. Beginning commercial operations in February 2018, the A350-1000 offers a total of 327 seats across two cabins, with 46 award-winning Qsuite Business Class seats and 281 18-inch extra wide Economy Class seats. The aircraft offers enhanced levels of passenger comfort, thanks to the lowest twin-engine noise level of any aircraft, advanced air conditioning technology and full LED mood lighting.

Qatar Airways introduced its revolutionary Qsuite Business Class services on the Frankfurt flights in May 2018, and will offer the Qsuite on its Munich and Berlin routes in September and November, respectively.

Qatar Airways, the national carrier of the State of Qatar, is celebrating more than 20 years of Going Places Together with travellers across its more than 150 business and leisure destinations. The world’s fastest-growing airline will add a number of exciting new destinations to its growing network in 2018, including Tallinn, Estonia; Valletta, Malta and many more, flying passengers on board its modern fleet of more than 200 aircraft.