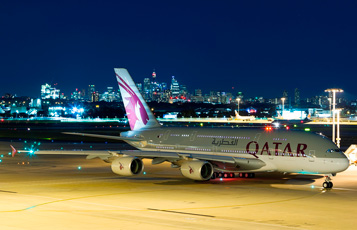 Qatar Airways’ A380 aircraft makes its Australian debut in Sydney

DOHA, Qatar, 2016-Sep-19 — /Travel PR News/ — Sydney has become Qatar Airways’ first destination in Australia to be served by the super-jumbo A380 aircraft, just six months after it joined the carrier’s global network.

Following the route’s inauguration with the Boeing 777-300 on 1 March 2016, Qatar Airways has seen a steady growth in demand for its service on the route. The 517-seater A380 aircraft increases Qatar Airways’ current daily capacity by 44 per cent on this route to meet the growing travel and trade demand.

Qatar Airways Group Chief Executive, His Excellency Mr. Akbar Al Baker, said: “From the moment we inaugurated service to Sydney earlier this year, we have been welcomed with open arms. Customers flying to and from Sydney appreciate our global route network and our efficient flight schedules, which save them hours of time on the average itinerary. We are pleased to respond in kind, with the introduction of the A380 service to Sydney, offering 517 seats per flight.

“Qatar Airways brings travellers from Australia to more destinations in Europe, the Middle East and Africa than any other airline serving Australia today. Australia is one of the main hubs of the business world in Asia Pacific, with many passengers flying worldwide for business and leisure. What better way to serve travellers from this key destination than to introduce our iconic A380 to the country, starting with the nation’s biggest hub, Sydney.”

The 517-seat capacity is spread across twin decks in a tri-class configuration of eight seats in First Class, 48 seats in Business Class and 461 in Economy Class, featuring world-class amenities and first rate services that set it apart from other aircraft. Passengers travelling from Sydney to London and Paris can enjoy the Qatar Airways A380 experience throughout their journey to these two European destinations.

“We’re thrilled that Qatar Airways has upgauged to an A380 within six months of the airline’s launch in Sydney, which is testament to their early success and strong loads,” Sydney Airport Managing Director and Chief Executive Officer Kerrie Mather said.

“Qatar Airways’ Doha-Sydney service already generates an estimated 3,000 jobs and contributes more than $240 million to the economy per year, plus it provides passengers with more choice and connectivity. Sydney Airport estimates that Qatar Airways’ A380 will deliver an incremental $78 million in inbound visitor expenditure annually to Australia, supporting the federal government’s target of doubling overnight visitor expenditure by 2020. On behalf of Sydney Airport, I’d like to congratulate Qatar Airways on this significant milestone and wish them continued success on the route.”

The A380 aircraft will feature a luxurious and exclusive First Class Cabin with ultra-wide seats, which automatically recline into a flat bed, two-passenger table extension dining, sleeper suits, flight slippers and amenities from Giorgio Armani. Passengers travelling in Qatar Airways’ award-winning Business Class can also enjoy private aisle access with the 1-2-1 seat configuration and a suite of connectivity options including on-board Wi-Fi, keeping them fully connected to while up in the air.

In addition, passengers in First and Business Class can relax and socialise at the on-board lounge located on the upper deck of the super-jumbo.

Economy Class passengers also benefit with the added spaciousness of the A380, with higher ceilings on the main deck, a wider seat configuration and design to offer more leg room plus contoured headrests.

When transiting through Qatar Airways’ hub, Hamad International Airport in Doha, passengers travelling from Sydney can enjoy a comfortable and efficient transit. The luxurious and modern airport has more than 40,000 square metres of retail space and restaurants including more than 70 retail and 30 food and beverage outlets, as well as a 25-metre swimming pool, gym, hotel and spa.

Qatar Airways, the national carrier of the State of Qatar, is one of the fastest growing airlines operating one of the youngest fleets in the world. Now in its 19th year of operations, Qatar Airways has a modern fleet of 190 aircraft flying to more than 150 key business and leisure destinations across six continents.

Oryx One, Qatar Airways’ inflight entertainment system offers passengers up to 3,000 entertainment options from the latest blockbuster movies, TV box sets, music, games and much more. Passengers flying on Qatar Airways flights served by its B787, A350, A380, A319 as well as select A320 and A330 aircraft can also stay in touch with their friends and family around the world by using the award-winning airline’s on-board Wi-Fi and GSM service.

Qatar Airways is one of the world’s leaders in sponsoring global sporting events, including the strategic team sponsorships of FC Barcelona and Al-Ahli Saudi Arabia FC. Qatar Airways’ strategy reflects the values of sports as a means of bringing people together, something at the core of the airline’s own brand message – Going Places Together.