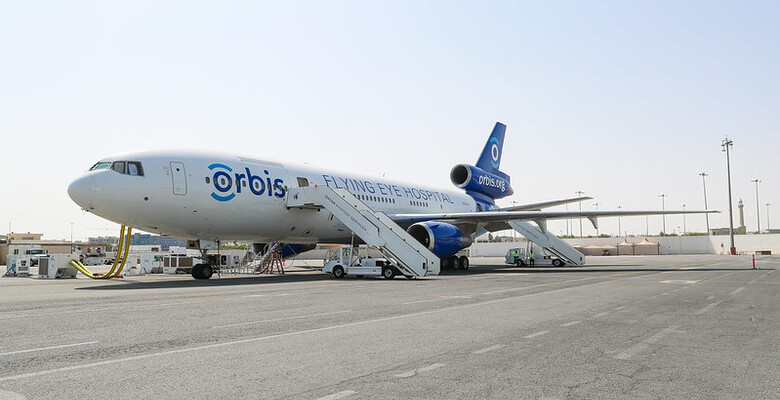 DOHA, Qatar, 2021-Apr-02 — /Travel PR News/ — Qatar Airways has renewed its sponsorship as Official Airline Partner to Orbis UK for a further three years. The airline has been a proud supporter of Orbis and its blindness prevention programmes since 2012.

Orbis is a leading global charity that brings people together to fight avoidable blindness through access to quality eye care. Together with its partners, Orbis trains, mentors, and inspires eye care professionals in places with the greatest need to save and restore vision in their communities.

The Orbis Flying Eye Hospital is a unique aircraft that supports the charity’s global effort to transform lives. The world’s only fully accredited ophthalmic teaching hospital on board an MD-10 aircraft is equipped with a state-of-the-art teaching facility complete with an operating room, classroom, and recovery room for patients. On board, Orbis’ world-class medical volunteers and clinical staff share their knowledge and expertise with local eye care teams across the globe.

Qatar Airways Group Chief Executive, His Excellency Mr. Akbar Al Baker said: “Qatar Airways is proud to strengthen its partnership with Orbis UK for another three years as Official Airline Partner – a further testament of our unwavering commitment to giving back and supporting the global community. We recognise that the gift of sight empowers individuals to reach their full potential, and we remain steadfast supporters of the fight against avoidable blindness through our partnership with Orbis UK.”

Orbis UK Trustee, Dr. Robert Walters said: “For nine years, the Qatar Airways Group has been a generous supporter of our organisation and we’re proud to continue onto this next stage of our partnership. Thanks to Qatar Airways’ renewed support, the Orbis team will have access to free flights to programmes to continue the fight against avoidable blindness in person when it i is safe to do so. Until this point, we remain committed to supporting our partners virtually and through our in-country programmes.”

Qatar Airways recently became the first global airline in the world to achieve the prestigious 5-Star COVID-19 Airline Safety Rating by international air transport rating organisation, Skytrax. This follows HIA’s recent success as the first airport in the Middle East and Asia to be awarded a Skytrax 5-Star COVID-19 Airport Safety Rating. These recognitions provides assurance to passengers across the world that airline health and safety standards are subject to the highest possible standards of professional, independent scrutiny and assessment. For full details of all the measures that have been implemented onboard and in HIA, please visit qatarairways.com/safety.

The national carrier of the State of Qatar continues to rebuild its network, which currently stands at over 130 destinations. With more frequencies being added to key hubs, Qatar Airways offers unrivalled connectivity to passengers, making it easy for them to change their travel dates or destination if they need to.

A multiple award-winning airline, Qatar Airways was named ‘World’s Best Airline’ by the 2019 World Airline Awards, managed by Skytrax. It was also named ‘Best Airline in the Middle East’, ‘World’s Best Business Class’, and ‘Best Business Class Seat’, in recognition of its ground-breaking Business Class experience, Qsuite. The Qsuite seat layout is a 1-2-1 configuration, providing passengers with the most spacious, fully private, comfortable and social distanced Business Class product in the sky. Qsuite is available on flights to more than 45 destinations including Johannesburg, New York and Singapore. It is the only airline to have been awarded the coveted ‘Skytrax Airline of the Year’ title, which is recognised as the pinnacle of excellence in the airline industry, five times.