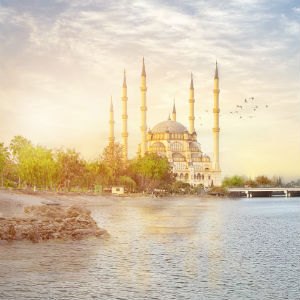 DOHA, Qatar, 2017-Sep-12 — /Travel PR News/ — Qatar Airways has responded to increased customer demand for service to Turkey by launching direct flights to the southern city of Adana, the airline’s fourth route to the country. The new three-times–a-week service is in addition to the airline’s existing flights to the capital Ankara, and services to historic Istanbul’s two main airports.

From 6 November 2017, Qatar Airways will operate an Airbus A320, with 12 seats in Business Class and 132 seats in Economy Class on flights between Doha and Adana Şakirpaşa Airport. It will be the first five-star Middle East airline to offer flights to and from Adana.

Located at the crossroads of Anatolia and the Middle East, Adana is Turkey’s fifth largest city and a major agricultural and industrial centre. A short distance from the Mediterranean coast, it is also famous for its traditional Turkish cuisine, and boasts several historic monuments and architectural landmarks, making it an ideal starting point for holiday-makers wishing to explore historic Turkey.

Qatar Airways Group Chief Executive, His Excellency Mr. Akbar Al Baker, said: “Qatar Airways’ new service to Adana will help reinforce links between the State of Qatar and the Republic of Turkey and deepen the friendship and co-operation between our two great countries.

“Adana is an agricultural and industrial powerhouse, so our new three-times-a-week service will help boost all-important trade and commercial links between Qatar and Turkey. It will also increase tourism to a city renowned throughout Turkey for its incredible local cuisine which acts as a magnet for food-lovers. We are delighted to connect southern Turkey to more than 150 destinations worldwide through our five-star hub, Hamad International Airport in Qatar.”

Adana Şakirpaşa Airport is the sixth-busiest airport in Turkey. At just 3.5km from the city centre, its international terminal can accommodate up to three million passengers a year.

Qatar Airways has a host of exciting new destinations planned for the remainder of this year and 2018, including Canberra, Australia; Chiang Mai, Thailand; Rio de Janeiro, Brazil and San Francisco,U.S., to name just a few. Qatar Airways has received a number of major accolades this year, including Airline of the Year by the prestigious 2017 Skytrax World Airline Awards, making it the fourth time it has been given this global recognition. As well as being voted Best Airline by travellers from around the world, Qatar’s national flag carrier also won a raft of other major awards at the 2017 Skytrax award ceremony, including Best Airline in the Middle East, World’s Best Business Class and World’s Best First Class Airline Lounge.

About Qatar Airways
Qatar Airways, the national carrier of the State of Qatar, is celebrating 20 years of Going Places Together with travellers across its more than 150 business and leisure destinations. The world’s fast growing airline will add a number of exciting new destinations to its growing network in 2017/18, including Dublin, Nice, Skopje, Sarajevo and many more, flying passengers on board its modern fleet of 200 aircraft.