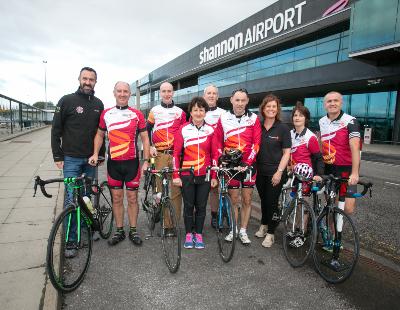 Shannon, Ireland, 2017-Sep-12 — /Travel PR News/ — Shannon Airport staff and friends had a sense of a job well done on Saturday afternoon after just short of 130 of them braved strong morning winds to complete the annual 110km charity cycle.

The satisfaction was ultimately gleaned from raising much needed funds for two charities – Cahercalla Community Hospital & Hospice, Ennis and Home Share Clare – which do immense work in the local community. But the smiles on the faces were also down to no small sense of achievement having completed the circuit from Shannon to Gort and back and dealing with strong winds into the bargain.

Cyclists from Clare, Galway, Limerick Tipperary and Cork all participated in the event and, in addition to those out on the road, other staff members combined with passengers and representatives of the two charities to keep the wheels turning on static bikes at the airport, raising additional funds in the process.

“It was a great day and the weather gods certainly smiled on us as we managed to get through the cycle with no rain. That was a big bonus,” said organiser Pamela Brooks, Shannon Airport.

“A lot of work goes into pulling the event together and we’ve a small committee that puts in a huge amount of work. But at the end of it all when you know you have a very healthy donation going to two incredible local charities that provide wonderful support for people who really need it, then it’s very satisfying.

” The monies going to the charities were swelled by a generous donation from main sponsors Shannon Airport. “It’s a great day for all involved but our eye is always on the fundraising and Shannon Airport really came up trumps here as our main sponsors. We’re also indebted to the Lady Gregory Hotel in Gort as they provided free refreshments for all the cyclists at the half-way point and Zest, which did likewise back here at Shannon as the cyclists returned. Every donation helps as there are costs in running the event also, including the very well-received goodie bags each cyclist got on arrival, complete with a Shannon Airport cycling gilet.”

As for the cycle itself, the first home – Paul Harrington, Albert Murphy and Barry Sutton – crossed the line at 12:28p.m., just under three and a half hours after the 110km event start. The cycle is one of a number of fundraising events from the Shannon Group Charities of the Year programme. Other events include the hugely popular Shannon Bank of Ireland Runway Night Run, which was held in June.