The Prime Minister spent time in the cockpit and toured the interior of the Airbus A350, for which Qatar Airways is the global launch customer. The aircraft is a key part of the flying display at this year’s show and is being displayed in Qatar Airways’ livery.

The flying display will celebrate 100 years of aviation, and will feature aircraft from every decade of the last century.

Overall, Qatar Airways will have on display at Farnborough an Airbus A350, an A320 and a Boeing 787 Dreamliner, with the latter two being on static display.

Commenting on the show, His Excellency Mr. Akbar Al Baker said: “Qatar Airways is pleased to be at the heart of this year’s Farnborough Air Show. We have three of the finest aircraft in the world on display, demonstrating our dynamic growth and focus on world-class quality, and are confident this week will be a successful showcase for Qatar Airways.”

Now in its advanced flight test programme phase, the A350 XWB aircraft are scheduled to enter commercial service in the fourth quarter of 2014. Qatar Airways has ordered 80 aircraft to date, leaning towards the larger A350-900 and A350-1000 models, which better suit its business model and passenger requirements.

You may also be interested in:  Qatar Airways and Boeing finalised an order for 50 777-9Xs at the Farnborough Air Show 2014

The 787 Dreamliner on display has a two-cabin configuration, comprising of 22 seats in Business Class and 232 Economy Class seats illustrating Qatar Airways high standard of on-board comfort, including individual 10.5 inch television screens for all Economy Class seats and a full complimentary food and beverage service.

The A320-200 has 12 Business Class seats, 132 Economy Class seats and on-demand audio video at every seat. Qatar Airways is in the middle of a major investment programme upgrading its A320 aircraft to include a 180-degree lie flat-bed, new 15.4 inch smart monitors and touch-screen remote control handsets as well as power, USB ports and connectivity for smart devices. The enhanced A320 aircraft will operate on the Vienna, Tunis, Milan, Rome, Geneva and Maldives routes.

Qatar Airways, the State of Qatar’s national airline, has seen rapid growth in just 17 years of operation, to the point where today it is flying a modern fleet of 134 aircraft to 144 key business and leisure destinations across Europe, the Middle East, Africa, Asia Pacific, North America and South America.

On October 30, 2013, Qatar Airways joined the oneworld Alliance, becoming the first Gulf carrier to join a global airline alliance, enabling its customers to benefit from almost 1,000 airports in more than 150 countries, with 14,250 daily departures.

You may also be interested in:  InterContinental Hotels Group announces plans to recruit another 110,000 staff to support its growth in China

During the 2013 Dubai Air Show the airline placed orders for more than 60 new aircraft – a mixture of Boeing 777X and Airbus A330 Freighters. In total the airline has 300 aircraft on order worth more than US $50 billion. For more information, visit our homepage www.qatarairways.com or our sites on Facebook, Twitter, Google+, Instagram, and YouTube. 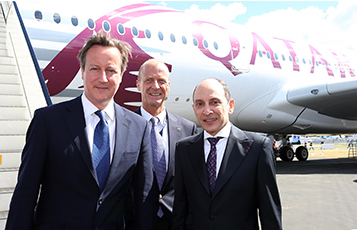 UK Prime Minister the Right Honourable David Cameron, alongside the Chief Executive of Airbus Group Tom Enders with His Excellency Mr Akbar Al Baker, CEO of Qatar Airways, standing next to the Airbus A350.