Farnborough, UK, 2014-7-16 — /Travel PR News/ — Qatar Airways has been recognised in three of the top awards at the annual Skytrax World Airline Awards, including winning World’s Best Business Class for the second year in a row. Qatar Airways was also voted runner-up in the Airline of the Year category.

The awards further cement Qatar Airways’ reputation as the world’s ultimate Five-Star carrier and are the result of its dynamic growth in recent years.

Commenting on the awards the CEO of Qatar Airways, His Excellency Mr. Akbar Al Baker said: “Qatar Airways is focused on providing the best quality product and service for our passengers, and we are very proud to have Skytrax recognise our airline, our people and our products via these awards. We strive to set the highest standards in the global airline industry and our young fleet helps us deliver the finest five-star service in the sky.”

Skytrax is acknowledged around the world for being the only truly global, independent aviation industry monitor. Results of the 2014 World Airline Awards are derived from millions of passenger surveys involving travellers from 160 different countries.

You may also be interested in:  Qatar Airways Privilege Club announce more new options for its members to earn and spend Qmiles

Qatar Airways is a core part of the Farnborough Air Show 2014, with three aircraft on display – the Airbus A350, A320 and a Boeing 787 Dreamliner. The A350 is featuring in the flying display, while the latter two are on static display.

Qatar Airways, the State of Qatar’s national airline, has seen rapid growth in just 17 years of operation, to the point where today it is flying a modern fleet of 134 aircraft to 144 key business and leisure destinations across Europe, the Middle East, Africa, Asia Pacific, North America and South America.

On October 30, 2013, Qatar Airways joined the oneworld Alliance, becoming the first Gulf carrier to join a global airline alliance, enabling its customers to benefit from almost 1,000 airports in more than 150 countries, with 14,250 daily departures.

During the 2013 Dubai Air Show the airline placed orders for more than 60 new aircraft – a mixture of Boeing 777X and Airbus A330 Freighters. In total the airline has 300 aircraft on order worth more than US $50 billion. For more information, visit our homepage www.qatarairways.com or our sites on Facebook, Twitter, Google+, Instagram, and YouTube.

You may also be interested in:  Qatar Airways and Virgin Australia expand their networks, lounges and loyalty programmes as part of a new partnership 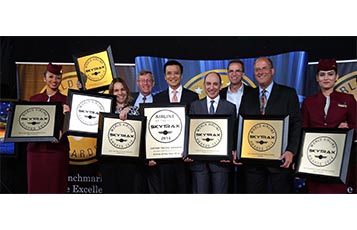 CEO of Qatar Airways, His Excellency Mr Akbar Al Baker, holding the award for World’s Best Business Class, along with leaders from airlines in the oneworld alliance, which was named World’s Best Airline Alliance 2014.