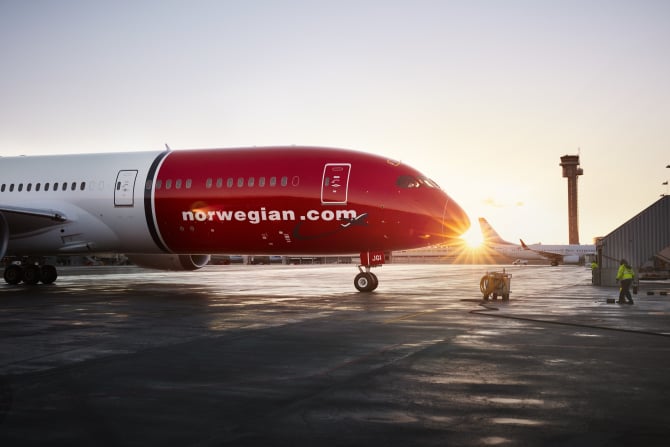 Fornebu, Norway, 2017-Aug-30 — /Travel PR News/ — Low-cost airline Norwegian will celebrate its 15th birthday this weekend and has launched a special sale giving holidaymakers the chance to bag a bargain flight to their favourite destinations. Starting today, the birthday sale offers savings on 19 long-haul routes, with flights to the US from just £99/€99 one-way and flights to Europe available on nine routes from just £29 one way.

The celebratory fares are available on 28 routes from the UK & Ireland with the special sale lasting three weeks, starting today (29th August) until the 18th September. The sale covers travel from 16th October 2017 to 16th March 2018 (see full T&Cs below). The flights on offer include:

Norwegian Chief Commercial Officer Thomas Ramdahl said: “To help celebrate 15 years of affordable flights with Norwegian, we’re delighted to offer holidaymakers further savings on 28 routes from the UK and Ireland. With affordable fares to the US, Singapore and Europe, our birthday sale has something to offer all travellers. We’re very grateful for the loyal support our passengers have shown us over the last 15 years, and we look forward to welcoming them on board for many more years to come.”

This September marks the 15th anniversary since Norwegian first started low-cost domestic flights in Scandinavia in 2002. Norwegian has grown to become the world’s 6th largest low-cost airline, now flying over 500 routes to more than 150 global destinations. In the last 15 years, over 200 million passengers have flown with Norwegian, with more than 30 million passengers choosing the airline each year.

In the UK, Norwegian now carries more than 5 million UK passengers each year from five UK airports, to over 50 global destinations. The airline has one of the youngest aircraft fleets in the world with an average age of 3.6 years, and more than 200 new aircraft on order. Norwegian has been awarded the ‘World’s best low-cost long-haul airline’ for three consecutive years at the SkyTrax World Airline Awards.