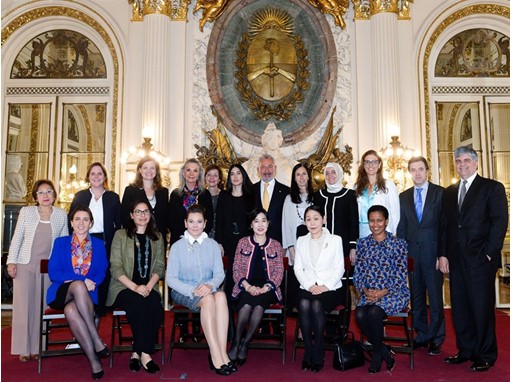 COLOGNE, Germany, 2018-Nov-27 — /Travel PR News/ — Lufthansa Airline HR Manager Martina Niemann is representing Germany in the international Business Woman Leaders Task Force (BWLTF). The BWLTF was first initiated at the Hamburg summit in 2017. Its aim is to bring together executives and managers from all G20 member states in order to foster the participation of women in the economy and increase the empowerment of women from all countries and socio-economic strata. The BWLTF has worked closely with previously established dialogue groups and, in the run-up to the G20 summit in Buenos Aires in late November, will submit their recommendations for how women can be further empowered socially and economically. These recommendations have been worked out in advance by the various national working groups and then consolidated by the BWLTF. Cornelius Baur, McKinsey Managing Partner Germany and Austria, had joined Martina Niemann in representing the German working group in the BWLT.

“This is not a woman-only subject,” Niemann emphasizes. “We can only succeed when women and men, politics and business work together.” The working group from Germany consists of members of the “Chefsache” initiative, which takes exactly this approach. The German network of leaders from industry, science, the public sector and the media was formed in 2015 and is dedicated to ensuring equal opportunity for men and women. The Lufthansa Group has been a member since mid-2016.

Lufthansa puts support for women at the top of the agenda

Martina Niemann was nominated by the German Chancellery to create and lead the national committee for Germany. “We are glad that the Chancellery has chosen Martina Niemann, a woman who lives the idea of gender equality and carries the commitment of Lufthansa Group to more diversity and equal opportunities into her business area every day,” says Bettina Volkens, Lufthansa Group’s Head of Human Resources.

Volkens adds that the Lufthansa Group places women’s empowerment high on its agenda: “Gender diversity has a central place in our HR strategy. Every leadership position in the Lufthansa Group is advertised openly and every shortlist has at least one qualified woman on it. We also offer multiple programs below the management level that prepare women – and of course men – for leadership positions.”

BWLTF position paper will be presented on 29 November

A joint position paper by all national committees will be presented to the representatives of the G20 states on 29 November by the BWLTF and discussed with them. “Fortunately, we were able to include many of the original German positions that were based on suggestions made by the established W20 (Women) and B20 (Business) dialogue groups in past years,” Niemann concludes. Ideally, these subjects will appear in the official closing statement of the summit after 1 December.

More information on the subject of diversity and equal opportunity in the Lufthansa Group can be found in the latest report Balance. To find out more about the “Chefsache” initiative go to www.initiative-chefsache.de or @Chefsache on Twitter.