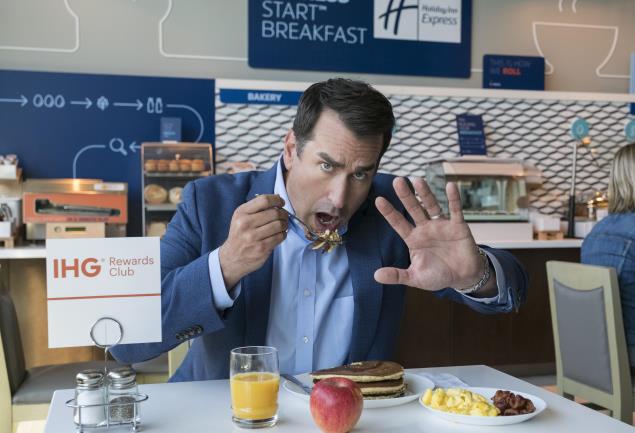 IHG announces the launch of its Holiday Inn Express brand campaign, Be The Readiest and its partnership with Jukin Media

Denham, UK, 2017-Apr-02 — /Travel PR News/ — InterContinental Hotels Group (IHG), one of the world’s leading hotel companies, today announces the launch of the newest Holiday Inn Express brand campaign,Be The Readiest, and its partnership with Jukin Media, a digital entertainment company that specializes in helping the global creative community leverage the world’s most compelling UGC videos.  The newest iteration of the beloved Stay Smart® campaign shows how the Holiday Inn Express brand helps its guests go from ready to the readiest in a series of creative vignettes— produced by creative agency of record Ogilvy and Mather— where crowdsourced videos demonstrate how people are on the top of their game when they are ‘The Readiest’.  Additionally, the Holiday Inn Express brand is bringing back Rob Riggle – actor, comedian and official Creative Director and Champion of The Readiest – for its Be The Readiest campaign spots premiering in May.

Holiday Inn Express sought out Jukin Media, which uses proprietary technology and a highly-trained global research staff to discover and clear the world’s best viral-style videos, to play an integral role in the campaign. With over 60 million fans across its social channels, the company curates and produces video for social platforms to the tune of 1.5+ billion views per month. Leveraging the power of the internet to find amateur content, Jukin was able to mine its vast video library and comb the broader social web to find remarkably engaging videos that perfectly demonstrate why being ready just doesn’t come close to being ‘The Readiest’.

Jennifer Gribble, Vice President, Holiday Inn Express®, Staybridge Suites® and Candlewood Suites® Brands, Americas, IHG commented: “We are excited to partner with Jukin Media to bring The Readiest campaign to life in a fun and creative way through these entertaining user-generated video compilations. This is a content led strategy, and the content in this campaign reflects the spirit of our guests. With energizing breakfast offerings, Keurig® K130 coffee brewers in-every guest room and a guaranteed great night’s sleep, Holiday Inn Express helps our guests Be The Readiest for where ever their day takes them.”

Brendon Mulvihill, SVP, Head of Licensing at Jukin Media, added: “It’s been a pleasure to work with a forward-thinking brand like Holiday Inn Express to leverage authentic, socially-native user-generated video content to tell their story in a way that resonates with their community.”

Gribble continued: “We are also excited to bring Rob Riggle back this year, expanding his role to Champion of the Readiest. When Rob first joined the Holiday Inn Express team as Creative Director and Breakfast Excellence Honcho in 2015, he upgraded breakfast with one-touch pancakes, hot and ready in 60 seconds, and, in 2016, he was back to introduce one-touch Keurig Coffee brewers in every Holiday Inn Express hotel room. Over the past two years, Rob has played an integral role in elevating the Holiday Inn Express guest experience from ready to the readiest and we are thrilled he is back on board as our Champion of the Readiest.”

This campaign kicks off today with a series of digital assets meant to inspire guests to Be The Readiest followed by hilarious TV spots featuring Rob Riggle. Throughout the spring, summer and fall of 2017, Jukin Media’s Readiest compilations and Riggle’s clever contributions will be featured on holidayinnexpress.com as well as the Holiday Inn Express brand’s YouTube, Instagram, Twitter and Facebook pages.

InterContinental Hotels Group PLC is the Group’s holding company and is incorporated in Great Britain and registered in England and Wales. More than 350,000 people work across IHG’s hotels and corporate offices globally.

Visit www.ihg.com for hotel information and reservations and www.ihgrewardsclub.com for more on IHG Rewards Club. For our latest news, visit: www.ihg.com/media and follow us on social media at: www.twitter.com/ihg, www.facebook.com/ihg and www.youtube.com/ihgplc.