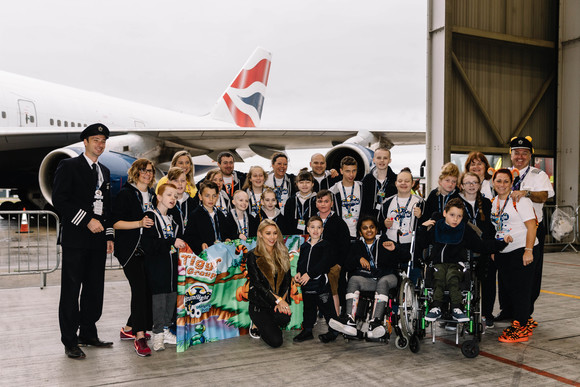 LONDON, UK, 2018-Oct-15 — /Travel PR News/ — Hundreds of children, who all have a serious illness or disability, arrived at Heathrow this morning for the departure of Dreamflight 2018 which whisked them to Orlando for a holiday of a lifetime on a chartered British Airways jumbo jet.

Every year Dreamflight raises funds to enable the British Airways 747 to fly almost 200 children to Florida to enjoy a fun packed ten-day trip. On the trip, they spend time at attractions including Walt Disney World, SeaWorld, Discovery Cove and Universal Studios.

Children at this year’s departure got to meet singer-songwriter Una Healy who mingled and took selfies with them before they boarded.

British Airways supports the Dreamflight team each year to help give the departure a party atmosphere. An army of volunteers donned superhero outfits, including dressing up as Stormtroopers to wow the children, while the Air Cadet National Marching Band performed popular hangar-roof-raising songs. British Airways cabin crew and pilots were also at Heathrow as the children boarded the superjumbo through a magical castle.

At the departure, Una said: “It is a pleasure to be part of such an inspiring event at the British Airways hangar this morning. Dreamflight does amazing work and it’s great to meet the children, hear their stores and see the excitement on their faces. I’m sure they’ll have a trip to remember.”

“It’s a huge honour to work with the team and seeing the reaction of the children at the departure and throughout their trip will be incredibly rewarding. Each year it’s astounding to see how their confidence grows as the trip progresses. It’ll be a magical experience that I’m sure the children won’t forget.”

Since the first flight in 1987 more than 5,800 children have flown on Dreamflight. For many it’s the very first time they’ve travelled abroad and been away without their family. The young fliers are accompanied by the Dreamflight team, British Airways cabin crew, and a fully trained medical team, which includes doctors, nurses and physiotherapists who are on hand 24-hours a day throughout the trip.

Amongst the adult volunteers will be those who went on the Dreamflight trip themselves as children. Aidan Healey, one of these volunteers, said: “As a child, Dreamflight gave me an experience I’ll never forget – I can still picture it so clearly, and I remember finding the departure party at Heathrow so exciting at a time when you’re dealing with a serious illness and just want to be able to enjoy being a child. It’s great to be back supporting the Dreamflight children as they head off on the holiday of a lifetime.”