2012-12-21 — /travelprnews.com/ — Eastern Airways passengers at Aberdeen Airport were being treated to some slapstick 1920’s comedy, when hilarious double act, Haurel and Lardy, provided some alternative Christmas entertainment with their side-splitting routines.

The duo, who have been together for more than 10 years and have performed for the Royal Family, are back at the airport today (Thursday) to replicate the ridiculous antics of screen icons Stan Laurel and Oliver Hardy during the day.

Graeme Hardy (Laurel) and Jeremy Smith (Hardy) have been brought in to help bring a bit of festive cheer to Eastern Airways passengers, who all have use of the airline’s dedicated business lounge at Aberdeen Airport.

Kay Ryan, Eastern Airways’ commercial director, said: “We thought this would be a great way to bring about some festive cheer to all our passengers flying through Aberdeen Airport. We hope this comedy treat will bring a smile to customers’ faces as they travel home for Christmas or head off for work.”

A fast track security channel is also available at Aberdeen Airport for all Eastern Airways passengers to avoid any queues at security search, which also enables the airline to close check-in just 30 minutes before the departure time. Passengers flying with the airline are not charged for check-in, baggage, choice of seat or onboard drinks and snacks.

Eastern Airways has a fleet of 31 aircraft flying the length and breadth of the UK and Europe on scheduled services and private charter flights. 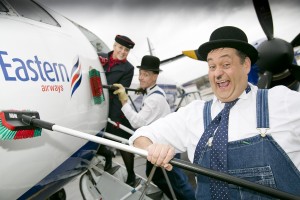