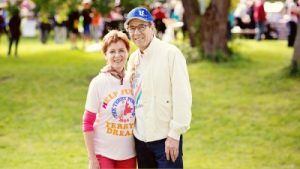 Toronto, Canada, 2016-Sep-09 — /Travel PR News/ — Hundreds of Four Seasons corporate and hotel employees will participate in the annual Terry Fox Run/Walk/Wheel/Ride at Wilket Creek Park in Toronto this year as the company continues to support Terry’s legacy and raise funds for cancer research in his name.

Four Seasons organises and participates in annual charity runs and other initiatives all over the world to raise funds toward advancing cancer research, a cause that has been supported by Four Seasons employees since Terry’s historic Marathon of Hope 36 years ago.

“In addition to raising much-needed funds for cancer research, the Terry Fox Run reminds us that everyone can make a difference, especially when we join together toward a common goal,” says Isadore Sharp, Founder and Chairman of Four Seasons Hotels and Resorts.

In the company’s hometown of Toronto, Canada, employees of Four Seasons Hotel Toronto and the corporate head office organise Ontario’s largest Terry Fox Run site at Wilket Creek Park. This year, 3,000 participants are expected to run, walk, wheel and ride through 2 km, 5 km and 10 km routes on Sunday, September 18, 2016.  Many Four Seasons employees and their families will volunteer by registering runners, serving food and refreshments, and helping with the children’s play area.  More than CAD 450,000 was raised in 2015, passing the CAD 10 million mark raised through this run site alone since 1981. Every dollar raised has gone directly to theTerry Fox Foundation.

This year’s pre-event campaign kicks off with members of the Four Seasons Terry Fox Committee joining the Terry Fox Foundation to open the Toronto Stock Exchange on Friday, September 9, 2016.  Corporate donations have remained an important part of fundraising efforts since 1980, when Isadore Sharp personally pledged to Terry’s cause and wrote to 999 other Canadian executives urging them to support cancer research.

On September 18, broadcaster Mocha Frap from radio station Kiss 92.5 will emcee the event, along with the Kiss Street Team.  Mocha will introduce Kathleen Wynne, Premier of Ontario; Rob Oliphant, Member of Parliament for Don Valley West; Isadore Sharp; and Terry’s Team Member Justin Lewis during the opening ceremonies beginning at 8:30 am. Fitness expert Sandra Parisi will lead the warm-up ahead of the 9:00 am official start.

Participants, volunteers and their families will enjoy entertainment by One Row Back, The Justin Bacchus Collective, Dance Surge and Soul2Sole.  Throughout the event, there will be complimentary breakfast and BBQ, children’s activities, parking shuttles, complimentary coat check and a massage tent for all registered participants. Registration is free and can be done online or at the Wilket Creek site from 8:00 am onwards.

Terry Fox inspired Canadians with his 1980 Marathon of Hope before succumbing to the disease the following year.  The first Terry Fox Run was held that year, and today there are more than 9,000 annual Terry Fox Runs around the world, all volunteer led and organised. To date, more than CAD 700 million has been raised worldwide for cancer research in Terry’s name.

The commitment of Four Seasons to cancer research began in 1980, when Isadore Sharp launched a corporate fundraising challenge for Terry’s campaign.  The following year, Four Seasons organised the first ever Terry Fox Run in support of cancer research, in his memory.

What began as a single event has now grown to include an event at every location in which Four Seasons operates.  As part of its unwavering global commitment to the cause, Four Seasons hotels and resorts host, sponsor and participate in countless local events to benefit both the Terry Fox Foundation and local cancer research and care facilities.