Beirut, Lebanon, 2013-11-5 — /travelprnews.com/ — Chef Sotiris Ananiadis is no stranger to Four Seasons Hotel Beirut, having spent two years working with the Hotel from 2010 as Executive Sous Chef, before jetting off to Japan to take the reins as the Head Chef at Four Seasons Hotel Tokyo at Marunouchi.

However, the Greek chef couldn’t resist the lure of Lebanon for long, and is back at the Hotel – this time to run the show as Executive Chef of Four Seasons Hotel Beirut, regarded as one of the city’s most exciting contemporary dining destinations.

With an impressive 16 years of international experience gained in countries as diverse as Greece, the Maldives, Bahrain, France and Japan, Chef Ananiadis brings with him his native Mediterranean flair, classical French training and professional experience in demanding Asian kitchens.

“It’s a real homage to Beirut’s burgeoning hospitality scene that we are able to entice chefs of Ananiadis’ calibre right back to the city. He knows the city’s dining scene very well and has got a great set of ideas on what he can add to it,” says Stefan Simkovics, general manager at Four Seasons Hotel Beirut. “Chef Ananiadis’ appointment is set to usher in an enhanced restaurant, banqueting and in-room dining offering at the Hotel, with a special focus on an internationally-diverse menu as well as locally-grown artisanal produce.”

The international theme transcends the entire food and beverage offering at Four Seasons Hotel Beirut, from European and Continental favourites through to Asian cuisine and the signature dining concept The Grill Room. The room service menu features everything from burgers to salads and steak, while an extensive banqueting menu aims to meet the requests of the most discerning bride and groom or society gala event planner, with a great deal of flexibility offered in terms of buffet or plated dining concepts, cocktail menus and live cooking stations.

Commenting on the culinary direction he wishes to take, Chef Ananiadis said: “The desire to delight the guest and seasonality are the two fundamental principles that drive my cuisine. We source products diligently from the finest artisans of Lebanon and abroad at the peak of their season, and retain their inherent quality by treating them with respect, creativity and a certain savoir faire acquired over the years. Then there’s the desire to give each guest a great tasting plate of food every time – I want each meal to be truly memorable.”

“I believe I am lucky to have the chance to explore the Lebanese cuisine, as it is known for its freshness and flavours and the basis of that reputation is great local produce. We want to bring these locally-grown ingredients back into the limelight and showcase them in a variety of internationally-appealing ways,” added Chef Ananiadis. 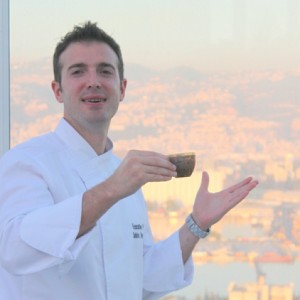